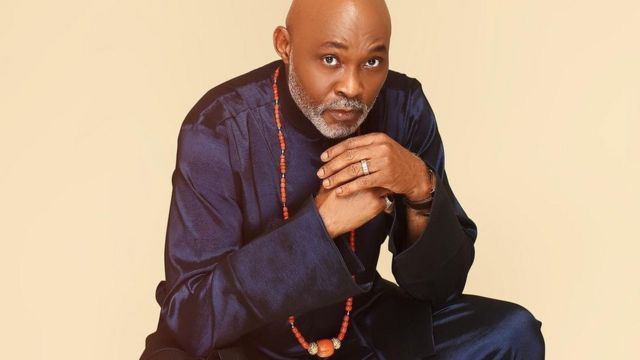 Popularly known as RMD, Richard Mofe-Damijo is a veteran in the Nigerian movie industry, starting out his career as an actor in the TV series Ripples which was popular in the 80s. He was born in Aladja community of Udu Kingdom, near Warri, Delta State.

Although he has appeared in less than 100 movies, which is relatively small compared to his popular counterparts, the actor has played almost any role you can think of – except being god in a movie. The sexagenarian, sometimes referred to as Nollywood’s finest grandpa, is also a good (okay not so good) dancer and fashionista.

RMDTheActor, as he fondly tags himself, has his own unique fragrance brand which he launched recently at his 60th birthday. The brand is called Timeless by RMD, he hopes users get a feel of what his time has been like over the years. Watch the launch below.

RMD attended Midwest College in Warri and Anglican Grammar School. He has always been fond of acting and was a member of his school’s Drama Club. He enrolled into the University of Benin to continue his education and studied Theatre Arts.

He remarried Jumobi Adegbesan after the death of his former wife  May Ellen-Ezekiel (MEE) in 1996. He has four children.

He recently launched a fragrance brand called Timeless by RMD, he is the founder and CEO of RMD productions – the company in charge of his latest TV show “The Mr X Family Show”.

His other vehicles include, a Mercedes-Benz GLE 550 which is estimated at around ₦24.7 million, a Lexus LX570 which he got for ₦42.2 million and a 2014 Toyota Highlander which costs approximately ₦17 million.

The veteran actor also owns a property in the Omole Phase 1 estate of Lagos state.

On days when I’m low and wondering where the next big thing is coming from, I am reminded that getting here in the first place was not by anything special I did but having enough COURAGE to believe in God and letting him lead me every step of the way. Dare to have that courage to be OBEDIENT to God’s leading.