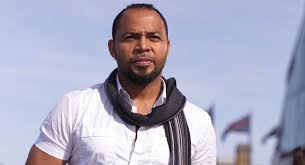 
When you talk about the growth of the Nigerian movie industry, popularly called Nollywood, Ramsey Nouah is one of the few faces that has championed it.

Appearing in many mid-budget to high-budget productions, Ramsey Noah has graced our screens with his incredible acting skills. Some of his popular appearances include, playing Jeff in the 1993-1994 TV series Fortunes and more recently playing Ayo Alesinloye in the Merry Men franchise.

Born in Edo, Nigeria on the 19th of December, 1970 as Ramsey Nouah Tokunbo Jr, he is aged 51 years as of 2021. He originally wanted to be a singer but later got his first break as a cast member on the early TV series “Fortunes”. His first major screen movie debut came in 1996 after acting in several low budget productions, he got a role in the movie Silent Night.

Born on December 19th, 1970 to a Lebanon-Israeli father and a Yoruba mother in Lagos, Nigeria, he is biracial, and he grew up in Surulere, Lagos State. His father’s name is Ramsey Nouah Sr, a Lebanon-Israeli. Ramsey’s mother, on the other hand, is a Yoruba from Owo, Ondo State. She goes by the name Margaret Afolabi. Not much about Ramsey Nouah parents is known to the public.

Nouah is married to Emelia Philips-Nouah, and together they have two sons named Quincy Nouah and Joshua Nouah, and one daughter named Desiree Nouah.

Ramsey started his primary school education at Atara Primary School, Lagos. He grew up in the Surulere suburb of Lagos. He continued to Community Grammar School for his secondary school education. He attended a diploma program in mass communication from the University of Lagos and went into full-time acting.

Nouah began showing up for auditions for TV series, and luckily, he was offered the role of Jeff in the television series known as Fortunes. He acted alongside actresses Liz Benson and Regina Askia in the series. Nouah’s career breakthrough came in 1996 in the best-selling movie called Silent Night. His exemplary performance catapulted him into the limelight, and he became a Nollywood sensation. Since then, the legendary actor has made tremendous appearances in various movies.

According to a report by nigerianinfopedia.com.ng his net worth is estimated to be $4.5 million. He owns an Aston Martin DBS Superleggera, which he reportedly bought for ₦140 million. He also owns a classic 1959 Cadillac Coupe DeVille, which is worth approximately ₦11.5 million.

Mr. Nouah is also reported to own a Range Rover Vogue (2012 model) estimated to cost around ₦30 million.  The actor is also a fan of electric cars as he acquired a Tesla Model X for ₦51.9 million. One surprising model in his collection is the Hummer H2 Stretch Limo that set him back at ₦64.5 million. You will also find the Rolls-Royce Phantom in his garage.

As one of the giant figures in Nollywood has appeared in over 150 movies since his debut, Ramsey has signed endorsement deals with Western Lotto as their ambassador, Nigerian multinational telecommunications company, Globacom and many more

A whole lot of people define success as being rich and having it all. I define success as peace of mind. To me, I am successful; I do not owe anybody and I have a clean heart and clean spirit. I am a happy man from the inside; that makes me very successful. I am not Jesus and I am not here to save the world. I am just an actor.

Handsome Ramsey Nouah is unarguably one of the most sought after, richest and influential across from Nigeria.