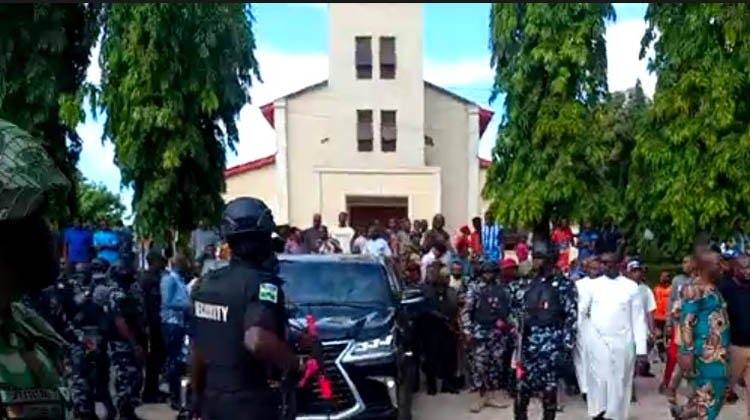 One of the Priests of the Catholic Church that was, on Sunday attacked by assailants has revealed how the church was attacked.

According to the cleric, the terrorists attacked as the day’s service was coming to an end.

He stated that the attack was “vile and satanic”, as it was a calculated assault on the peace-loving people of the Owo Kingdom who had enjoyed relative peace over the years.

In his words, “We were about to round off service. I had even asked people to start leaving, that was how we started hearing gunshots from different angles.”

“We hid inside the church but some people had left when the attack happened. We locked ourselves in the church for 20 minutes. When we heard that they had left, we opened the church and rushed victims to the hospital.”

Narrating further, he said, “It is a black Sunday in Owo. Our hearts are heavy. Our peace and tranquility have been attacked by the enemies of the people. This is a personal loss, an attack on our dear state. I have spoken to the Bishop of the Catholic Diocese of Ondo, Most Reverend Jude Arogundade, who is presently on his way to Owo. Similarly, I have had to cut short my party’s national assignment in Abuja and visit Owo immediately.”

The Owo church attack had left the community perplexed as it was gathered that over 40 people were killed by the yet to be identified terrorists, not excluding children and women.

More videos from the invaded catholic church in owo

Update: words in the streets is that this happened at St Andrews Church in Owo Ondo state. Link for full video on bio.

It was said that gun men came into the church while worship was on and started shooting.#update #breaking #Catholic #ondo #bomb #fulani #blackchully pic.twitter.com/MuZbMlj14c

Related Topics:blasphemyfeatureterrorist attack
Up Next

2 shot dead in an 18 sitter bus in Kwara state

Is Formal Education really worth the hassle anymore in Nigeria?