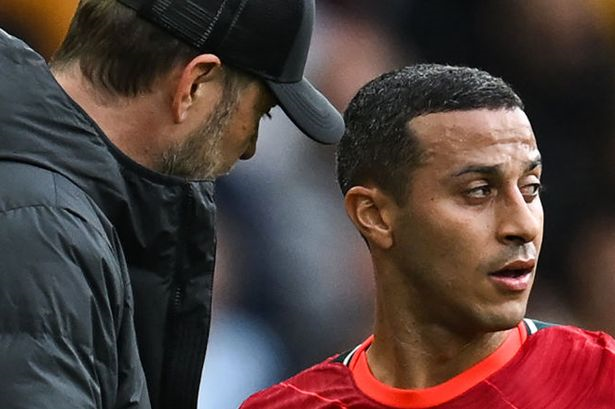 Give Liverpool the credit, they had one of the best seasons in the league this season, and almost came close to within grasp of the Premier League title had Villa held City on for much longer.

But that being said, Liverpool and Jurgen Klopp have more to worry about this season than dwell on the past and what they cannot control. Their season is not over yet as they have another trip at Paris.

Ahead of the game, Liverpool have been met by a few challenges as regards the presence of some of its stars, particularly those key to the midfield.

Midfield maestro, Thiago Alcantara was forced off injured against Wolves in the first half, after producing a moment of magic that saw Liverpool equalize Wolves’ lead in the 22nd minute of the first half.

Now, this adds to the dilemma as Liverpool look short in midfield ahead of the final, as there is no confirmed word on the extent of the injury, with Klopp in his post match conference saying it doesn’t look all that good for the Spaniard who limped off.

It’s been a frustrating one for Thiago’s Anfield career as injuries tend to come at him at the most critical times; notable mention being the Carabao Cup final in which he was set to start only failing to after picking injury during warm up.

With little words on Fabinho’s fitness so far, aside that he will be available for the final, Klopp surely has more to think of as it is, in preparing for a final against Real Madrid.