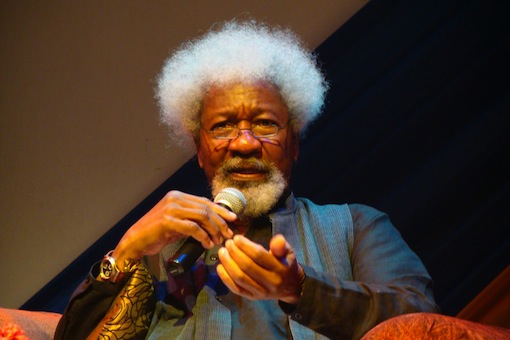 Nobel laureate, Prof. Wole Soyinka on Monday said Nigeria is long overdue for reconfiguration, saying it is sickening for some people to be agitating against it.

Soyinka, in an interview with some newsmen at the Freedom Park on Lagos Island, Lagos, Southwest Nigeria said those who said what Nigeria needed was just a restructuring of the mind were not saying the obvious.

Soyinka said restructuring of the mind was what could be done on daily basis, but that what the nation needed right now was real restructuring which he called ‘reconfiguring.’

In his words: “my position is that people should not allow themselves to be put off by those who tried to cheapen the expression; As I said when I visited the Women Arise the other day, it doesn’t matter what name you called it, we all know that Nigeria was deconstructed and that what we live in right now as a nation is not along a structure that expresses the true will that we love Nigeria;

“I find it very dishonest and cheap; time selling, trivializing the issues, when I hear the expression that it is the mind which needs to be restructured, who is arguing it? Who is denying that? It is not a substitute, why are you bringing it up? We are talking about the protocol of association of the constituting part of a nation, we are talking about decentralization, that is another word.

“This country is over-centralised and that has been the bugbear of development, even on issues like security for decades; so individuals should not now try and sidetrack the issue and say concentrate on that rather than this, are you saying that you cannot reconstruct the mind and reconstruct the nation at the same time?

“My take on it and my express advice to the citizenry is that they should not allow themselves to be sidetracked, call it whatever name, what we are saying is that this nation is long-overdue for reconfiguration. That is the expression I chose to use now.”

Soyinka stated that the word that the unity of Nigeria would not be negotiated as was made by President Muhammadu Buhari when he returned from medical vacation abroad, was another ploy of sidetracking the issue, saying nobody is talking about disuniting Nigeria.

“We know there are movement for secession, let Buhari and others go and address this separately, this should not be mixed with the demand of a nation for reconfiguration, people should stop answering demand for secession by pretending to answer the demand for reconfiguration. Secession should be a different thing, to try and suggest that the moment you say restructure, you are calling for disintegration, is for me intellectually dishonest, that is not the issue at all.

“The issue of outright secession is totally different. Even if it is only one state that is left, that state has a right to say, listen you people, let us restructure this state; the protocols which have gone into the making of this state are no longer valid or have been distorted along the way or have been abandoned and we want to go back to the original set of protocols that created what we call this national entity, in other words, there are choices all over the place, you can say you want to re-invent the will completely or you can say you want to go back to the original protocol of association, whichever way,” he said.

Assessing Buhari’s administration in the last two years, Soyinka admitted that there were yawning gaps, citing the issue of security as a case study, saying that “the average citizens feel less secured now than it did few years ago, that is evident; when people talk about state police, there are reasons for that; when they talk about bringing policing right down to the community level, they know what they are talking about. This is part and parcel of reconfiguration or reconstruction.

“The economy, there is a big question on it right now; fortunately everybody admits that we went through a very bad patch; right now, is the question of have we come out of it or not? In fact there is no question about it, the past few years have been years of internal economic disasters for the average citizens, but it is a question of who laid the seed? When and where and how were the seeds laid for the agony this nation is going through the last few years?”

When asked to comment on clamour for a second term in office for Buhari by his aides and supporters, Soyinka said he was shocked by the move just midway into the president’s administration.