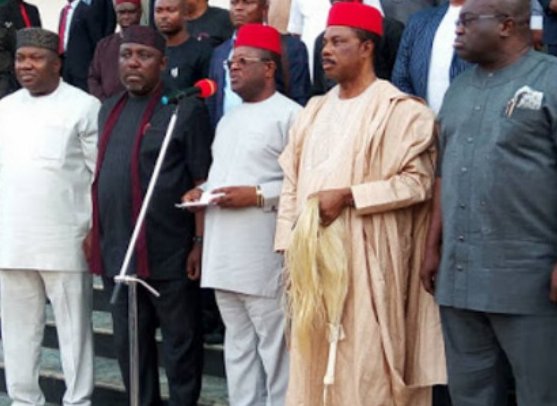 The South East Governors’ Forum has announced the proscription of activities of the Indigenous Peoples of Biafra (IPOB).

Arising from its emergency meeting on Friday in Enugu, Chairman of the forum, Gov. Dave Umahi of Ebonyi requested the group and other of such groups to articulate their grievances and send to the forum.

Umahi appealed to all governors in the zone to ensure compliance with the directive in their various states and for the Federal Government to withdraw the troops in the zone.

Umahi said: “All activities of IPOB are, hereby, proscribed. IPOB and all other aggrieved groups are advised to articulate their position on all national issues.

“Such should be submitted to the committee of governors, Ohaneze Ndi Igbo and National Assembly members from the South East zone through the chairman of the South East Governors’ Forum,” he said.

The Ebonyi governor said that the forum believed in the unity and indivisibility of the country and reinforced their desire for the restructuring of the country.

“We reinforce our desire for the restructuring of Nigeria where all national issues will be discussed and amicably settled to achieve justice and fairness to every Nigerian.

“Accordingly, we appeal to President Muhammad Buhari to, please, withdraw the military in the South East zone, while police perform their traditional role of maintaining law and order,” he said.

Umahi said that the forum was in touch with their northern counterparts “who have assured us of the safety of our people living in the north and we have also planned for exchange of visits to reinforce confidence.

“We wish to assure Nigerians that full investigation is ongoing on all allegations of killings, maiming and other unlawful conduct in the zone within this period,” he said.

He said that appropriate actions would be taken against those found culpable.

Umahi said that governors in the zone had taken adequate measures to protect the lives and property of indigenes and non-indigenes and urged northern governors to do same in their respective states.

“We advise all residents of the zone to go about their normal businesses as governments of each state is committed to protecting everybody,“ he said.

The governor said that all those invited for the meeting were present except the leadership of IPOB that sent in their apologies.

At the meeting were governors of Abia, Anambra, Ebonyi and Enugu while Imo was represented by the deputy governor.