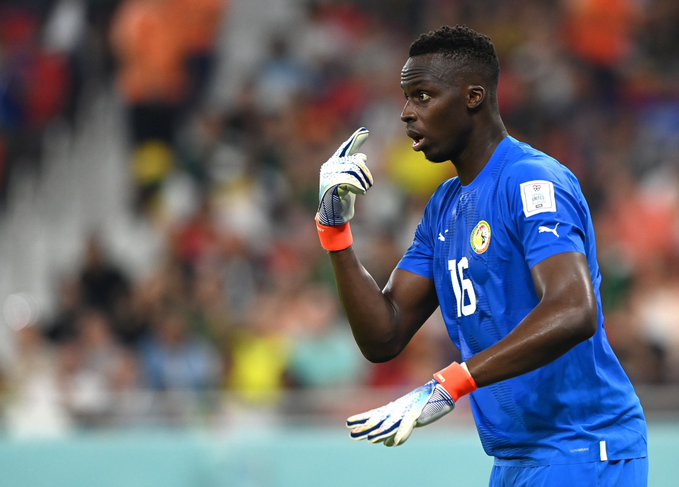 Following Senegal’s victory on Tuesday against Ecuador and England coming out on top of their group ahead of the likes of the USA, Iran and Wales, the Senegal national team are set to be face off against England in the round of 16 with the fixture providing Senegal goalie, Edouard Mendy a chance at redemption.

Edouard Mendy so far this season has seen his performances in goal take a dip in form specifically from the first group stage fixture against Dutch side, Netherlands in the world cup tournament, after an error in goal forced Holland to race into the lead and eventually claim all 3 points within the group.

Of course, the error may still be revisited by the Senegal fan base considering a point within that fixture could have placed the Teranga Lions in a perfect position to meet a less tougher opponent had they managed to come 1st in the group ahead of Netherlands.

However, Senegal qualifying into the next round comes as every bit of satisfaction for the African side but this time, eyes fall on Edouard Mendy to redeem himself against the likes of Harry Kane to lead the Senegal team into the last 8 of the tournament.

A minimum of five nations have earned spots in the Round of 16 in the 2022 World Cup.

Following their games on Tuesday, England, Senegal, the Netherlands, and the United States secured their places in the round of 16.

Marcus Rashford scored twice for the Three Lions in the second half as they defeated Wales 3-0.

The Netherlands defeated Qatar’s hosts 2-0, Aliou Cisse’s team defeated Ecuador 2-1, and the Americans squeezed out a difficult 1-0 victory over Iran.

In the Round of 16, England will play Senegal, and the Netherlands will play the USA.

On Wednesday, when Australia takes on Denmark and France takes on Tunisia, more teams will be vying for qualification.

Gavi Will Find It Difficult In EPL—Ex Manchester United Star