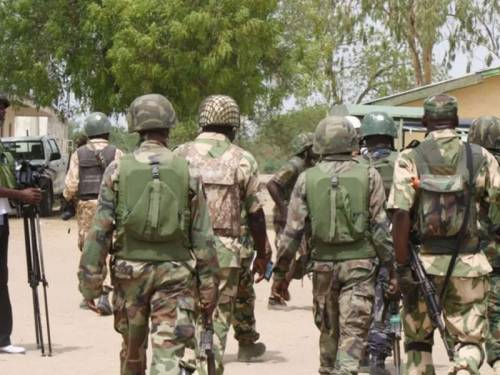 Strike actions appear the go to route in attracting the government’s attention, and right now, Nigerian soldiers are ready to join the union of striking workers.

In an open letter addressed to the President, top army officials have been accused of corruption and extortion in the army and have protested strike actions if the issue isn’t tackled.

Some aggrieved personnel of the Nigerian Army have accused the President of failing to check corruption and financial mismanagement among top military officers while junior soldiers continue to cry on daily basis.

The soldiers alleged that despite their many complaints, nothing has been said or done about unpaid allowances by the military finance corps.

Their letter read, “We want to start by saying that it is a shame on General Muhammadu Buhari for failing to address the financial mismanagement of Nigerian soldiers while they continue to cry on daily basis.

“The salary of our soldiers is being paid through POS, phone transfer in connection with banks by the army finance department. Our soldiers have been crying but no one is saying anything.

“Our Soldiers continue to buy their uniforms themselves and every other kit needed to protect the people and the nation. No uniform allowance, no boot allowance, and nobody are saying anything.

“The soldiers we don’t see as anything are the ones that are keeping this country moving. They are using their lives as a wages (sic) between Nigerians and our adversaries.

“Pay our soldiers their money in full and do it now. Army finance should not have anything to do with our soldiers’ salaries and allowances.” The letter read.

Nigeria looks to be headed for dark times should the army not be listened to by the government.

Related Topics:ASUUcorruption in the armyNigerian army. letter to President Buhari by the Nigerian armysoldiers protest unpaid wages
Up Next

Deborah Samuel: Northern youths seek Naomi Goni’s release so she can be lynched