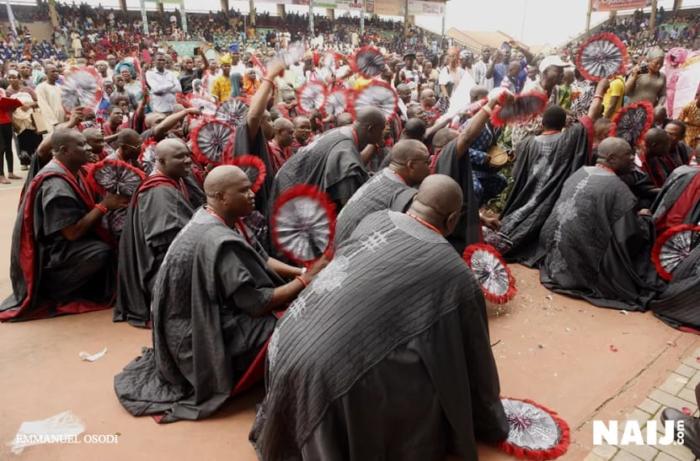 Many Illustrious Ijebu sons and daughters on Sunday defied the rains to converge in Ijebu-Ode, Ogun State to grace the 2017 edition of the annual `Ojude Oba’ festival in the town.

The `Ojude Oba’ celebration in Ijebuland is an annual event during which indigenes of different age groups, their friends and associates from both far and near thronged the palace of the Awujale, for the carnival-like celebration.

Some of the dignitaries in attendance at the 2017 fiesta included a former Governor of Ogun, Otunba Gbenga Daniels, Otunba Olasubomi Balogun, the Proprietor of First City Monument Bank, Chief Kola Banjo, Chief Dayo Adeneye, and many others.

Some Ijebu-Ode residents who deliberately abandoned their usual Sunday routines disclosed that the Ojude Oba celebration was core to their unity as a people.

Otunba Wahab Osinusi, Chairman, Ojude Oba Festival Committee, said that the pomp and pageantry displayed in the “Ojude Oba’’ was an appreciation by the Ijebu Muslim faithful to the Awujale, for giving them the freedom of religious worship.

According to him, pledging allegiance to the Oba was core to having a peaceful and controllable reign over all of Ijebu territory.

“The reign of the Oba has become extremely great with the sustenance of this festival and we must remain faithful to his rule.

“Over the years, the “Ojude Oba’’ has brought so much love, peace, prosperity and stability to indigenes both within Ijebuland and across the diaspora,’’ he said.

Osinusi said that the gods will continuously bless partakers of the festival for their yearly contributions to ensure its success.

Kayode Adetoro, a 24-year-old U.S.-based entrepreneur, said that the glitz and colours of the “Ojude Oba’’ were second to none globally.

“I have always attended this festival since I was 18 with my late grandfather and every year, it opens my eyes to a lot more fun, people and traditional rites than I have learnt from previous ones.

“Describing the parade of colours at the festival as that of a rainbow is not out of place because the Ijebu people use it to showcase their dress style, as a people.

Otunba Olutoyin Osibogun, an ijebu indigene, said that the festival was an annual platform for sons and daughters of the soil to meet, interact and network across board.

“We do not only showcase our culture but we help generations to learn and emulate the very essence of the festival.

“Unity is what every Ijebu man stands for and with the current situation of the Nigerian economy, we are using this as a platform to stay strong in these trying times,’’ she added.

`Ojude-Oba’ is a Yoruba festival held in Ijebu Ode, Ogun State, in Southwestern Nigeria. It is held annually on the third day after Eid el-Kabir.

The festival began over 100 years ago. Today, the festival is usually attended by over 250, 000 people from across the six geopolitical zones of Nigeria.

It is often sponsored by the incumbent Awujale, the people of Ijebu-Ode, individuals and corporate organisations.

Tradition: Ex-Olori Needs Cleansing Before She Can Be With A Man Again