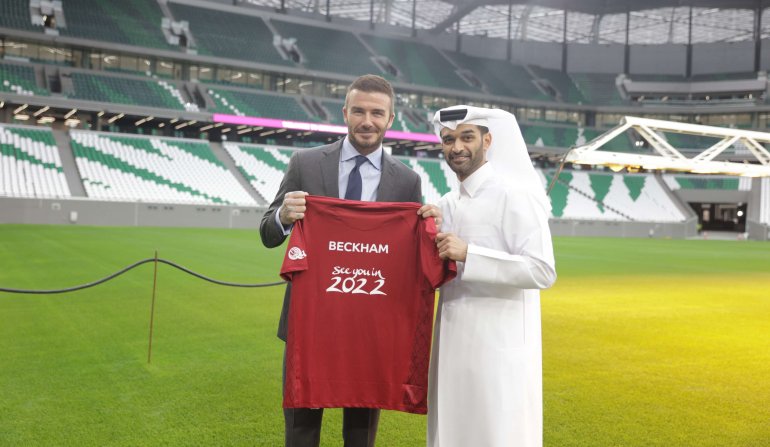 David Beckham, former Manchester United, and Real Madrid star has been unveiled as the face of the Qatar World Cup next month in a deal worth £150million.

The former England captain, 46, who gained international fame for his on-field play as well as for his highly publicized personal life, signed a deal worth £15million a year, over the next decade to become the country’s ambassador.

Known for his range of passing, crossing ability and bending free-kicks as a right-winger, Beckham has been hailed as one of the greatest and most recognisable midfielders of his generation, as well as one of the best set-piece specialists of all time

A source speaking to Sun UK said: “David believes in Qatar’s commitment to progress and that the World Cup — the first to be held in the Arab world — can effect significant positive change.

“He strongly believes in the power of football to bridge differences but, crucially, has seen the progress on issues that matter.”

“By signing David, the hope is more westerners will be encouraged to see its beautiful beaches, vast expanses of sand dunes and incredible skyscrapers.”

A spokeswoman for David Beckham said: “David has always talked about the power of football as a force for good on many levels.

“As we reach the one year to go point he will join the wider football community that is coming together for the World Cup 2022 and he’s looking forward to what he thinks will be a great tournament.”

Meanwhile, the Qatar World Cup is facing heavy backlash from many people after 6,500 workers reportedly died while building the new stadiums to host the games.

Related Topics:David Beckham
Up Next

The best UEFA Champions League finals of the XXI century