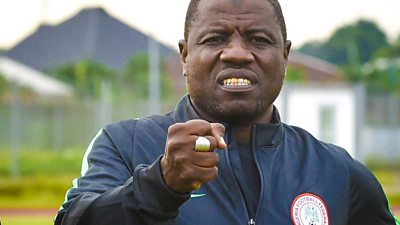 The Nigerian Football Federation has re-appointed Salisu Yusuf as the Super Eagles assistant coach and the head coach of the home-based Eagles.

This is coming three years after he was suspended for bribery activities.

Salisu previously held the role under Gernot Rohr, but he left the position after he was caught on camera, receiving bribes to influence his team selection.

The 58-year-old trainer was filmed collecting $1,000 to include two players in the Nigeria squad by Anas’ Tiger Eye Investigation team who posed as footballers’ agents.

He was subsequently banned from all football-related activities for a year and fined $5,000 after the documentary aired on the BBC.

However, three years after his ban, the 59-year-old tactician is back in his former role.

The NFF confirmed Salisu’s reappointment in a statement released to the media.

Yusuf spent all his playing career in the Nigerian League and represented Nigeria at both junior and senior levels. He started his playing career as a midfielder for ABU Football Club before he went on to play for several Nigerian football clubs including Ranchers Bees and El-Kanemi Warriors[

Related Topics:Salisu Yusuf
Up Next