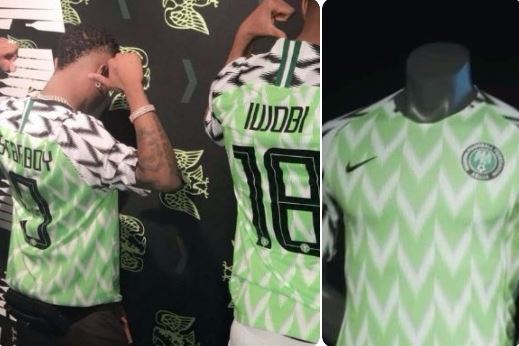 Nike used their official YouTube channel to do a reveal of the new Nigeria jersey designs for the Super Eagles’ Russia 2018 World Cup campaign.

The designs will ignite memories of the patterned Adidas jersey the Super Eagles wore at the 1994 Africa Cup of Nations in Tunisia and their first World Cup in the United States of America that same year.

What appears to be the away kit has the shirt in the predominantly light green background with bold white V-shaped patterns drawn on it. The sleeves are white underneath black patterns. The shorts are plain white.

The home shirt is all-green, this one darker than usual.

While reviewing the designs, Mikel said:

“I can see the players going crazy over this one.”

Ndidi also sounded excited, adding “This is cultural” in an apparent reference to the patterned away kit.

“This is different, you know,” Iwobi added, while Iheanacho seemed happy with all the designs.

The Super Eagles wore Adidas jerseys at the last World Cup but the kit makers and the Nigeria Football Federation severed their relationship soon after.

The Eagles are expected to launch these kits on March 23 when they face fellow World Cup finalists Poland in a pre-World Cup friendly.

Four days later, the Eagles will also wear the new kits for another World Cup warm-up game against Serbia in London.