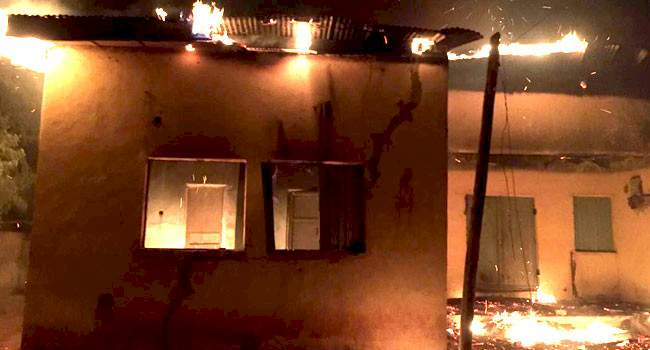 INEC Offices going into flames have in some way strangely become a norm in Nigeria, and oddly enough; always occur prior to an election event taking place, whereby news reports peer up on screens informing Nigerians how documents got burnt, data got lost and so on.

They are the kind of the stories that are hastily told to Nigerians in which Nigerians are to accept wholeheartedly, no questions asked, no explanations given, no follow up reports on, who is at fault for an electoral office mysteriously bursting into flames or the like. And even more weird is that Nigerians don’t find themselves asking questions; such as the How, the Why or the what.

Now, flashback to Tuesday Morning, the 3rd of May, 2022, News report has one of the offices of the Independent National Electoral Commission (INEC) in Zamfara State engulfed in fire, some months to the general elections.

The affected office reported to be the INEC facility in Kaura Namoda Local Government Area of the state, with locals informing news televisions of how the fire started at 9pm, razing to ashes the entire building. No word on what led to the flames at a supposed electoral office that obviously wasn’t a factory or a gas station let alone close to one.

The reports even go on to stress how firefighters came to the scene almost in time to put out the flames, but couldn’t because in some way, lacked water in the tank.

The story was widely reported online and by almost everyone, but what stands incredulous is how no one seemed to question the details in the reports; the fact that there were eye witnesses to the scene but somehow they were all oblivious to the cause of the fire, or that firefighters would arrive to a burning scene with little to no fire even while being early.

What is even made more laughable is for the fact that eyewitness accounts reported nothing being retrieved or removed from the INEC office before or even when the building was burning, but all stood long enough, present in the scene to give accounts to media people.

There’s no arguing that buildings can suddenly go into flames, but usually when they do, there are further reports detailing the full story. But in this case, the reports are either limited or repetitive, and it’s high time people start asking the right questions.