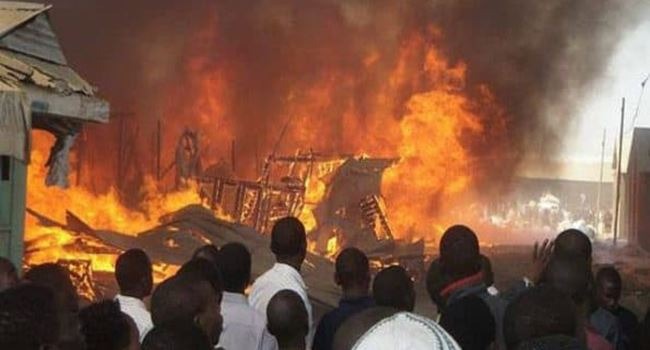 Outcry as fire takes the lives of two and razed down 100 shops in Kano market right as a result of a fire incident.

It was said that no less than two people had been killed as a result of the fire outbreak at a marketplace in Kano State.

The outbreak also led to the destruction of shops of about 100.

According to him, the incident happened at the Badume vegetable market in the Bichi local government area of Kano State.

He said three persons were trapped, including a female and two males.

Abdullah explained that a rescue team was quickly mobilized to the scene and were rescued unconscious and later taken to the hospital, and two were confirmed dead.

Speaking on the incident, he urged the public to use fire and electrical appliances with care to avoid an inferno.

Yusuf said the cause of the incident is still under investigation.

Bandits Demands N10m For The Release Of Kidnapped Corpse To Family