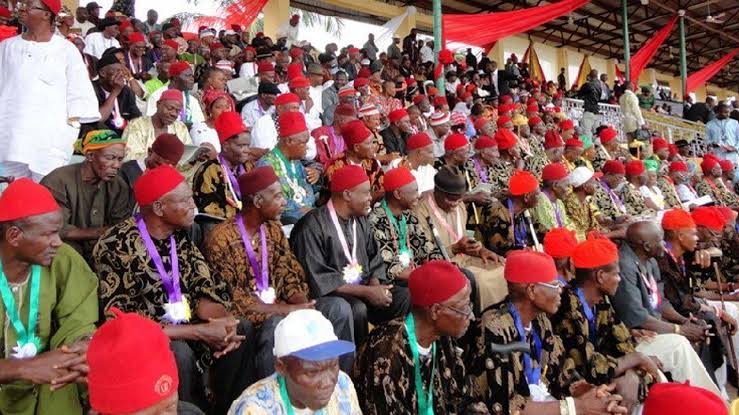 The Igbo Elders Consultative Forum warned the All Progressives Congress and the Peoples Democratic Party towards the 2023 election that any attempt to rob the South-East geo-political zone of their presidential tickets would be resisted.

They also warned that no Igbo politician and those they described as “renegades and bootlickers” should accept to be presidential running mate to any person.

The organisation popularly known as Ime-obi Ohanaeze Ndigbo, specifically revealed that such action would spell doom for the corporate existence of Nigeria.

The Igbo Elders stated that the idea of another Northerner succeeding the President, Major General Muhammadu Buhari (retd.), would be a direct invitation for the aggravation of crises, conflicts and separatist demands.

According to the organization, ceding the presidential tickets of the two major political parties to the South-East would permanently heal the wounds of the civil war which, they said, were responsible for the gross marginalisation of the Igbos in the country’s scheme of affairs.

Ezeife said, “The Igbo Eiders met and discussed diligently some crucial national issues, including the zoning of the 2023 Presidency to the South that have far reaching consequences on the stability. peace, unity, progress and development of Nigeria, and came up with following resolutions:

“We maintain our unalloyed support for the demand of the Southern Governors Forum, the Southern and Middle Belt Forum, the Afenifere, the Niger Delta Forum, Ohanaeze )Worldwide) among other credible stakeholders and organizations that all political parties in the country should zone the 2023 Presidency to the South and possibly micro-zone it to the South East for the sake of justice, equity and fairness.

“The Igbo Elders want Nigerians and the whole world to note that the existence of Nigeria as a corporate entity may be seriously threatened by any attempt to deny the South, especially the South East the opportunity to produce the next President in 2023.”

The organisation told the Igbo politicians from the South-east region jostling for the presidency in 2023 not be distracted by the alleged plots by the APC and the PDP to scheme them out of the race.

Ezeife said, “We encourage the presidential aspirants from the South East to remain resolute, persistent, focused, painstaking and close-ranks until victory is assured.

“Igbo Elders are with you and are prepared to work with you in liaison with Ohanaeze World Wide and other patriotic Nigerians to ensure that the right thing is done, that is the emergence of Nigerian President of South East extraction in 2023.”

Related Topics:2023 electionsIgbo
Up Next

UN vows that terrorism perpetrators would be punished