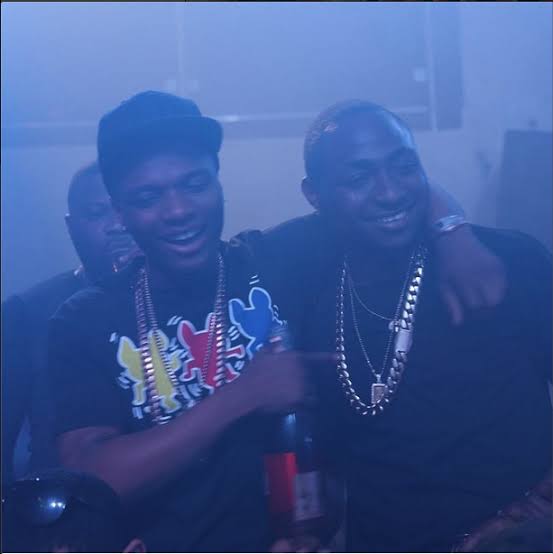 From the moment Wizkid and Davido came into the Nigerian music scene, many of their fans had pitched an imaginary rivalry between the two as both young musicians were loved by many and were both in high demand because of their very popular hit songs.
Davido and Wizkid both maintained a cordial relationship with both parties more often than not performing at the same shows. But that relationship spiraled out of control as the music stars started trading words and insults on their social media pages some time in July. It has been a very fantastic year for Davido, scooping major awards while Wizkid hardly got any.
But some few weeks back, Wizkid made a surprise appearance at Davido’s elder brother’s birthday party which held at Escape Night Club and also took a friendly photo with Davido (pictured above) showing that they had indeed settled whatever misunderstanding between them.
According to NET, when Davido was asked about his beef with Wizkid, he said:
‘It’s all good now, some rich men brought us together and it’s finally resolved. It’s officially resolved, no more drama.’
When asked who the rich people who got involved, he said:
‘Some very powerful men, I can’t say their names, it was like a round table meeting and it’s all good now.’

Exclusive interview with Wizkid On His Relationship Status And Marriage!