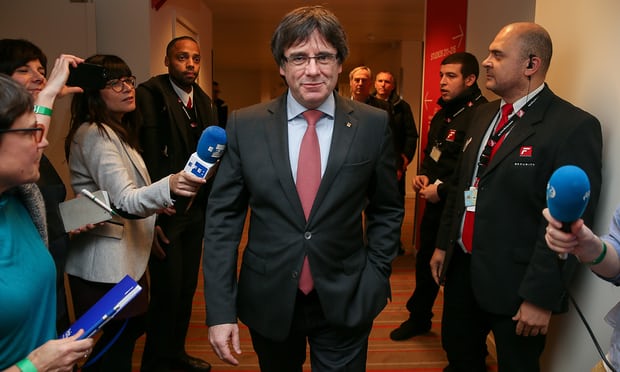 Catalan pro-independence parties have held their absolute majority in snap regional elections, dealing a severe blow to the Spanish government, which had called the polls in the hope of heading off the secessionist push.

The three separatist parties won a total of 70 seats in the 135-seat regional parliament even though the centre-right, pro-unionist Citizens party was the single biggest winner, taking 36 seats.

Between them, the three parties will have enough seats to reassemble the parliamentary majority that put them into office after the 2015 elections if they can agree a new coalition.

Trailing them was the Catalan branch of Spain’s ruling People’s party, which won four seats – seven fewer than in the last election two years ago.

Thursday’s snap election was called by the Spanish prime minister, Mariano Rajoy, in October after he used article 155 of the constitution to take control of Catalonia and sack its government over its unilateral referendum and subsequent declaration of independence.

The vote, which pitted secessionists against unionists, attracted a record turnout of more than 80%, dispelling fears that holding the election on a weekday rather than the usual Sunday would hit turnout.

Puigdemont had been campaigning from Belgium after fleeing to Brussels on the grounds that he would not receive a fair trial in Spain over possible charges of rebellion, sedition and misuse of public funds.

His former vice-president, Oriol Junqeras, leader of the ERC, is in prison along with two prominent pro-independence leaders.

Puigdemont said the results had demonstrated the strength of the Catalan people. “As Catalan president I wish to congratulate people for delivering an indisputable result,” he said in Brussels. “We have won this election in exceptional circumstances, with candidates in prison, with the government in exile and without having the same resources as the state.”

Marta Rovira, number two on the ERC ticket, said the election showed that Catalans had voted for a republic. She said: “Now we have to reopen parliament and respect the democratic mandate.”

But Inés Arrimadas, the leader of the Catalan Citizens party, said of its strong showing: “We have sent a message to the world that a majority in Catalonia is in favour of the union with Spain. For the first time, a constitutionalist party has won a Catalan election.”

Xavier Albiol, the leader of the Catalan People’s party, congratulated the Citizens party on its results and conceded it had not gone well for his own party.

“It’s been a very bad result for PP but also for the future of Catalonia,” he said. “We have warned of the dangers of a secessionist majority and although they have less support, they will be satisfied.”

Miquel Iceta, the leader of the Catalan socialist party, called on whoever becomes the next Catalan president to “reject the unilateral path that has done so much damage”, adding: “What is clear and that the government has to recognise is that the laws can and should be changed.”

His sentiments were echoed by the candidate for Catalunya en Comú-Podem. “This country needs to enter a new stage,” said Xavier Domènech. “These elections show that the central government has to enter into a real dialogue.”

Much will now depend on what the pro-independence parties agree. Puigdemont is facing arrest if he returns to Spain and fractures have appeared between him and Junqueras, who has appeared to take a more moderate line on independence.

The vote is the latest chapter in Spain’s worst political crisis since its return to democracy four decades ago. The results will be bruising for Rajoy and will do nothing to heal divisions in the region, which remains deeply and evenly divided over the independence issue. Any solution to the vexed question of Catalan sovereignty remains as elusive as ever.

The pro-independence movement, which has grown over the past five years, raised the stakes in June when Puigdemont announced that a unilateral referendum would be held on 1 October, with Catalans asked: “Do you want Catalonia to be an independent country in the form of a republic?”

Despite warnings from the Spanish government and the country’s constitutional court that the vote was illegal, Puigdemont pressed ahead with the referendum, in which 90% of participants opted for independence on a turnout of 42%.

The day was marred by violence when Spanish police, who had been instructed to halt the plebiscite, dragged voters out of polling stations, beat them with truncheons and fired rubber bullets.

At the end of October, MPs in the regional parliament again defied the central government by voting for independence by a margin of 70 votes to 10 as dozens of opposition MPs boycotted the secret ballot.

Rajoy responded by invoking the never-before-used article 155 to take control of Catalonia, sack the regional government and call the elections.

Related Topics:CatalanPro-Independence Parties
Up Next

Top 10 Things To Note From Nigerian Newspapers This Friday morning