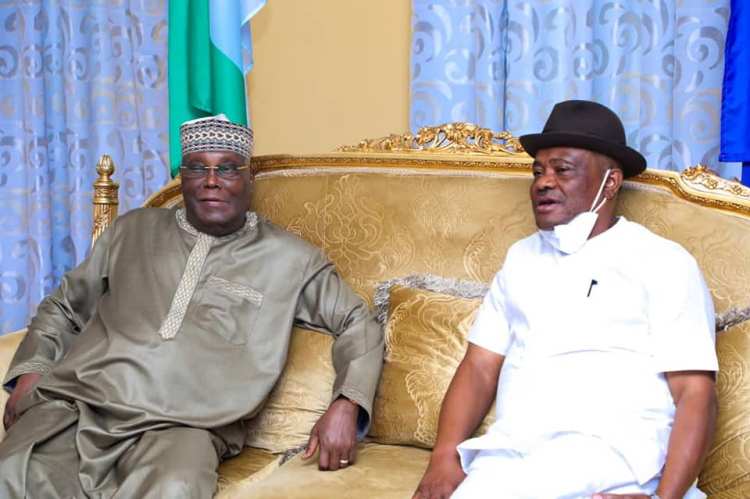 Atiku Abubakar, a former Vice President of Nigeria has claimed that Nigerians are waiting eagerly for the Peoples Democratic Party (PDP) to take over power at the federal level in 2023.

Alhaji Atiku explained that party affairs brought him to Port Harcourt, and he had spent the time reconciling touching issues with Governor Wike.

According to him, the issues bother on how to ensure unity and stability in the Peoples Democratic Party (PDP), which are critical for the party in clinching electoral victory in 2023.

“Well, I came here to reconcile with the governor on party affairs and how we can ensure that there is unity and stability in the party.

“So, that we can take over government in 2023. I believe that Nigerians can’t wait for 2023 to come so that PDP will return.”

Atiku also spoke on the current insecurity challenges that have overwhelmed the capacity of the All Progressives Congress(APC) led federal government.

He described the prevailing situation in the country as bad.

He urged Nigerians to wait for the appropriate time when PDP shall unveil its policies on how it wants to address the issue of insecurity across the country.

“Why can’t you give us time. We will come up with our policies. We will present them to Nigerians when the time comes.

“We have done that before. Under PDP, we recorded the highest economic growth, the best foreign reserves, we reduced unemployment. You know that we can do it?

The former vice president also acknowledged the tremendous leadership success recorded by governor Wike, who he described as the topmost governor among his peers in the party.

“I think he(Wike) is the topmost governor we have in the party. There is no doubt about that in terms of projects, youths and employment, in terms of security. Yes, we have security challenges all over the country.”

He further commended the governor for his outstanding leadership and sterling performance in office.

Related Topics:2023 presidencyAtikuWIke
Up Next