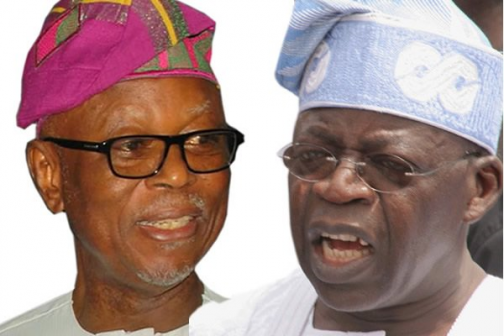 National leader of the All Progressives Congress (APC), Asiwaju Bola Tinubu, has accused the National Chairman of the party, Chief John Odigie-Oyegun of sabotaging his efforts to reconcile warring factions in the party.

The assignment to reconcile aggrieved factions in APC was given to Tinubu by President Muhammadu Buhari ahead of the 2019 election.

But in a letter written to Oyegun, copies of which were sent to President Buhari, Vice President Yemi Osinbajo, Senate President Bukola Saraki and Yakubu Dogara, Speaker of the House of Representatives, Tinubu accused the APC National Chairman of sabotage.

The APC national leader directly accused Odigie-Oyegun of contravening the spirit of the discussions both of them had at the party secretariat when President Muhammadu Buhari gave him the assignment of reconciling aggrieved members.

In the letter, dated February 21, 2018, Asiwaju Tinubu stated that “disappointment greeted me when I discovered that you had swiftly acted in contravention of the spirit of our discussions. Instead of being a bulwark of support as promised, you positioned yourself in active opposition to the goal of resuscitating the progressive and democratic nature of APC”.

Tinubu said while Odigie-Oyegun mentioned Kogi, Kaduna, Kano and Adamawa as places affected by serious party issues, “you have taken it as your own personal ambition to thwart my presidential assignment in these key states”.

He accused the chairman of rushing to Kogi state to unilaterally inaugurate officials “parallel to the officials already heading the state chapter of the party”.

“While this may place you in significant affinity with those parallel officials you handpicked, this machination suggests no improvement in the welfare of the party in Kogi or at the national level,” Tinubu wrote.

Tinubu said Odigie-Oyegun apparently seeks “to undermine my mandate by engaging in dilatory tactics for the most part. When forced to act, you do so in an arbitrary and capricious manner”.

The APC chieftain said even if Odigie-Oyegun had personal qualms with him, it is his right as a human being but “you have no such right the chairman of this party… The party belongs to all of its members”.

He asked the former governor of Edo state to refrain from taking any more “improper unilateral decisions with regard to the national and state chapters of the party”.

He reminded Odigie-Oyegun that the assignment was given to him by Buhari, stating that “in furtherance… I request that you make available to me the status reports and all the pertinent information regarding the state chapters without further delay”.

TheCable reports that Tinubu, who is supporting Buhari for a second term, is not comfortable with Odigie-Oyegun’s continued leadership of the party, although pro-Buhari governors have impressed it on the president that it was better to elongate Odigie-Oyegun’s tenure than risk a new convention that could further fracture the party.

Tinubu’s relationship with Odigie-Oyegun has been on a downward trend since the APC primary election for Ondo governorship in 2016.

Segun Abraham, thought to be Tinubu’s preferred choice, was defeated in controversial circumstances by Rotimi Akeredolu, who went on to win the governorship election.