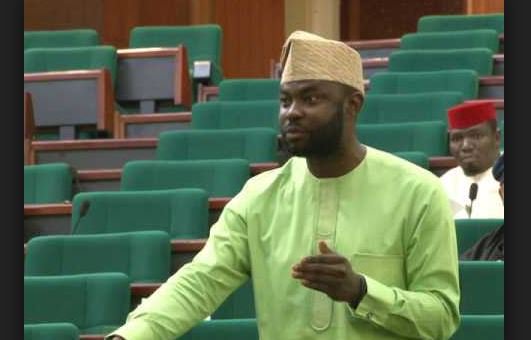 Fijabi, who is currently serving his second tenure in the green chamber, had during the leadership crisis in the Reps, engaged his fellow members in a free for all, where all his clothes were torn.

In a recent exclusive interview with the Punch Newspaper, the young lawmaker had explained why he engaged in such fight during the plenary.

He was quoted as saying, “Yes, I was only trying to save democracy. I was trying to save the mace. I didn’t throw punches; what I did was to only try and save the symbol of authority, the mace”.

Fijabi, a House Committee Chairman on Telecommunications, has, however, refused to get low in the news of controversies and crisis.

Recently, a news of his alleged misconduct was broken by NassNews.com and Watchdog News, two online media covering the activities of the National Assembly, where it was alleged, the Reps Speaker, Hon. Yakubu Dogara and some members had to call him to order.

According to the online report, “a shouting match ensued recently at an ad-hoc committee meeting, between Hon Fijabi Saheed and members of the ad-hoc committee, where the former was said to have been called to order by Hon Ekanem Iboro.

“However, the Speaker of the House of Representative was said to have cautioned Hon Fijabi to desist from instigating Corporate Nigerians against the assignment of the ad-hoc committee, an action he said was capable of tarnishing the activities and image of the green chamber.

“Other allegations against Hon Fijabi was recruiting the Association of Licensed Telecommunication Operators into the disagreement with his colleagues, all in an attempt to stall the ad-hoc committee work”.

This publication, however, did not go down well with the lawmaker, who requested his Legislative Aide, Baba Suleiman, to invite the Chairman of online Media in the National Assembly, after lambasting one of the reporters on phone.

Key people pleaded with Hon. Fijabi to calm down and issue a reaction, which he promised would be published via same platforms, but the lawmaker was said to have requested to see the authors of the publication.

“Rather than following the suggestion of our Chairman, Hon. Fijabi decided to pounce on me, engaging me in open fight”, one of the reporters, Oluwole Adeboye said.

He said it took the efforts of other lawmakers who heard Fijabi shouting on top of his voice, to come and separate the fight.

Speaking further, Adeboye said “When I finished writing this report, I called Hon. Fijabi severally but he didn’t pick. I went to his office to get his own side of the story but he told me he was busy. I had to publish what I had written and then get his reaction published afterwards.

“But he didn’t allow that to happen. He assaulted me and my Chairman who had come to make peace. His boys too tried to beat us before we were rescued. He called the Police and Sergeant at Arm to arrest us that we were criminals.

“Acting on his instructions and without giving us the opportunity to express ourselves, myself and the chairman who came to rescue the situation were bundled inside a van like criminals in the watch of everyone.

“We were held for hours and all our phones seized. It took the effort of a Senior DSS officer who gave us the opportunity to express ourselves and he intervened before we were discharged”.

In a brief chat with our Correspondent shortly after his release on Tuesday, Itodo attributed his ordeal and that of his members to “local politics being played by the Press Corp of the National Assembly”.

Itodo specifically accused the Chairman of House of Reps Press Corp, Puma Umar, of instigating Hon. Fijabi to arrest the reporters who authored the story.

It was gathered that, the Press Corp of both Senate and Reps have been engaging the online reporters in a cold war, since the National Assembly New Media Chapel was formed, few months ago.

The Press Corp, comprising of the Electronic and Print media, has reportedly petitioned the management of the National Assembly and the security agencies, to stop the online chapel from being inaugurated.

Just last week, a Correspondent of the Blueprint Newspaper in the Senate, reportedly fought an online Reporter, Samson Atekojo, using a chair, in the glare of his colleagues, threatening the online reporters to vacate the Senate Press Centre.

It took the intervention of the Sergeant at Arm to calm the situation.

The said Blueprint Correspondent at the Senate also placed direct calls on some Editors of online newspapers, threatening to deal with their reporters if they were not redeployed from the National Assembly.

But the online media, through which the 8th National Assembly had recorded great success, has refused to give up.

In a recent chat with the Chairman, Yemi Itodo, he said, the National Assembly Management had been informed about the association of the online media.

Itodo said, “We wrote to the Clerk of the National Assembly, we copied the Senate President, the Speaker of Reps, all the Principal Officers of both chambers, the Directorate of Information, all the security agencies in National Assembly and other stakeholders.

“We have also gone far with the Nigerian Union of Journalists and they have given us a go-ahead. The NUJ is coming to inaugurate us very soon.

“The Press Corp cannot stop us from covering National Assembly. Some of us have been here for over 5 years and have suffered the humiliations of these cabals.

“We are trained Journalists; we won’t join issues with anyone. I have told my members to avoid being confrontational with anyone. It’s just unfortunate that Hon. Fijabi didn’t understand the local politics of the Press Corp and he fell for it.

“In a civil society where things are done with decorum, if anyone feels hurt by a publication from any medium, such fellow, no matter how highly placed, should either make use of his right of reply or request for a retraction of the publication, and if the medium fails to retract it, such fellow should approach the law court”.

Do not waste time on conflicts, Osibajo warns Executive and N’assembly