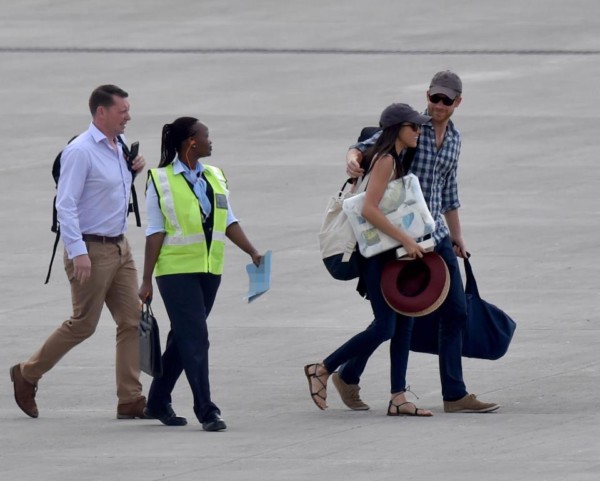 Prince Harry and his girlfriend Meghan Markle are visiting southern Africa in celebration of her 36th birthday, sparking rumors that the Prince could be intending to propose, The Sun reports.

The exact country where they visited is not yet known but it may be any of the following: Angola, Botswana, Lesotho, Malawi, Mozambique, Namibia, South Africa, Swaziland, Zambia, and Zimbabwe.

The two were pictured arriving at the airport, the 32-year-old Prince with an arm draped over Meghan.

A source close to the royal family revealed that the Prince has been planning the trip for a long time. The source said:

He’s made the trip incredibly romantic. They’ll go on boats across the lake, walk in the bush at dawn and camp under the stars.

Who knows what will happen when they’re watching a sensational African sunset together? Maybe he’ll get down on one knee. Harry regards Africa as his spiritual home and has often talked of how he can get away from it all  there.

Obviously he wants to show Meghan what an amazing place it is and create new memories together.

Harry’s done a lot of conservation work in Africa with endangered el­e­phants and black rhinos and he’ll show them to the woman he wants to marry.

It’s fitting that the spectacular safari started on her birthday — what a way to impress a girl! He’ll make this a holiday she’ll never forget and perhaps she’ll come back with a ring on her finger.

A friend of Meghan’s also reveal that she’s quite excited about the trip.

“She is super excited about their holiday together and to see Africa though Harry’s eyes. Of course, she’s visited the continent before through her charity work, but this is her first ever safari,” the friend said.

On a trip to southern Africa was also where Prince William proposed to wife Catherine, Duchess of Cambridge, sparking rumours that Prince Harry could be intending to propose.

This isn’t the first time Prince Harry is visiting that part of Africa with a girlfriend.

He took his ex Chelsy Davy to South Africa, Mozambique, on several occasions, once spotted fishing and swimming in the ocean, and another time cruising in crocodile- infested waters while on board a rickety house boat.

Related Topics:AfricabirthdaygirlfriendMeghan MarklePrince Harry
Up Next

Two Women, one man sue Usher over Exposure to Herpes