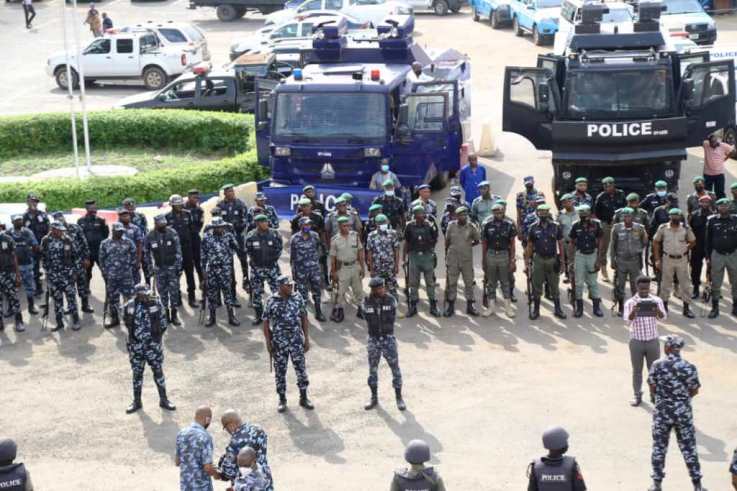 
The Police Command in Lagos State on Friday began show of force in the state to warn agitators and Yoruba Nation separatists against any form of rally scheduled to hold in the country’s economic capital on Saturday.

Subsequent to Thursday attack on Yoruba rights activist, Sunday Adeyemo aka Sunday Igboho by the Department of State Services (DSS), the activist, who has been declared wanted by the secret police for allegedly accumulating arms, had suspended the Lagos rally.

However, the aegis body of Yoruba Self-Determination Groups, Ilana Omo Oodua, led by Second Republic Senator, Banji Akintoye, had declared that there was no going back, stating that “It is the duty of Police to ensure the rally is not hijacked by hoodlums.”

“Our rally scheduled to hold on Saturday will still hold without any fear or intimidation, and we promise to be peaceful like we have always been,” the Akintoye-led body wrote in a letter to the Commissioner of Police in the state, Hakeem Odumosu; and Governor Babajide Sanwo-Olu.

Akintoye, Igboho and their supporters have been going across the South-West geopolitical zone to campaign their secessionist movement, quoting injustice doled out to the people of the region and also deteriorating insecurity as explanations for their agitation but the Federal Government has insisted on the unity and inseparability of Nigeria.

According to a statement on Friday, the Lagos State Police Command, again, warned that no rally would be allowed in the state. The statement was signed by the command’s spokesman, Muyiwa Adejobi, was entitled, ‘Oodua Republic Mega Rally: Lagos Police, Security Agencies Embark On Show Of Force, Warn Agitators’.

The statement read, “The Lagos State Police Command and other security agencies, today 2nd July, 2021 embarked on Show of Force around Lagos State to confirm their preparedness and commitment to continuous protection of lives and properties of the good people of Lagos State and send a warning signal to the organizers of the said mega rally or any group of persons planning to stage any rally or procession in the state despite the warnings issued during the joint press briefing by the Commissioner of Police, Lagos State, CP Hakeem Odumosu and the Commissioner for Information and Strategy, Lagos State, Mr Gbenga Omotoso on Thursday, 1st July, 2021, at the Press Centre, State Secretariat, Alausa, Ikeja.

“The Command and the Government of Lagos State had warned the organisers of the planned Oodua Republic Mega Rally, scheduled for Saturday, 3rd July, 2021, at Gani Fawehinmi Freedom Park, Ojota, Lagos, to steer clear of Lagos State, considering the available intelligence reports on the planned rally and to forestall any breakdown of law and order.

“The Command and other security agencies, including the Nigerian Army, Nigerian Security and Civil Defense Corps, Federal Road Safety Corps and Department of State Services have however put measures in place to prevent any act of lawlessness, oppression and intimidation, of any kind, in the state on the said date, 3rd July, 2021 and beyond as Lagos State cannot afford to record and experience the violence orchestrated by some individuals during the 2020 Endsars protest that led to massive destruction of lives and properties in the state.

“The command still reiterated its stance that anyone caught participating or facilitating the so-called mega rally in Lagos State will be dealt with within the ambits of the law.”