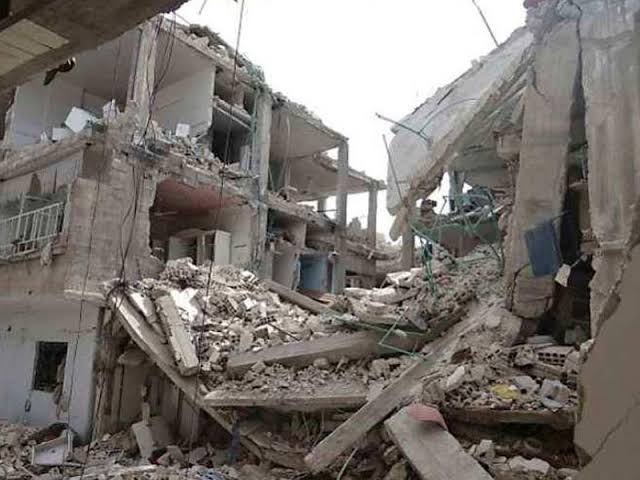 A two-storey building collapsed on Saturday afternoon on the Lagos Island area of Lagos State and one person has been confirmed dead also one person rescued alive.

The building which was under construction according to witnesses collapsed after a heavy rain.

For the past few months, three incidents of collapsed buildings have been recorded in Lagos State. The areas are,  Yaba, Ebute-Metta and Okota areas, with 15 lives lost.

About 50 persons perished in the 21-storey building that collapsed on Gerard Road, Ikoyi collapsed on November 1, 2021..

Also, on May 1, 2022, a three-storey building collapsed in the Ebute Metta area of the state leaving at least 10 persons dead.

After the collapse, the Lagos State Government ordered the immediate stoppage of approval for structures above three floors in Ebute-Metta East and West.

“The soil and topography, the low water level and effects, as well as the inability of structures in this area to bear loads above three floors, were considered in arriving at this decision,” Salako said.

“The Lagos State Physical Planning Permit Authority has been directed to henceforth stop taking applications for approval above three floors in the area.

“To guarantee the safety of lives and property by ensuring that we put a halt to lives being cut short by incidents of building collapse, the government has been compelled to invoke the relevant sections of the Lagos State Urban and Regional Planning and Development Law 2019, as amended, to address the crisis,” Lagos Commissioner for Physical Planning and Urban Development, Dr Idris Salako, had said in a statement on Wednesday, May 11.

Commissioner of Police in Osun counsels youth to desist from cultism