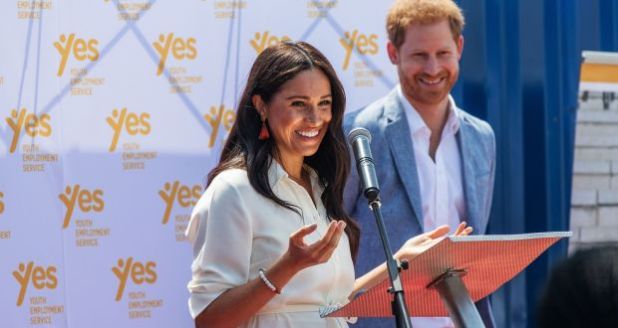 Meghan Markle, wife of Britain’s Prince Harry, has been sued by her half-sister, Samantha Markle for defamation.

Samantha sued the Duchess of Sussex for defaming her in Meghan’s now-famous interview with Oprah Winfrey.

The interview immediately became one of the most extraordinary chapters in recent royal history.

Samantha noted that the ‘rags to royalty’ narrative that the duchess presented about herself was simply false.

In the court document obtained by TMZ, Samantha claimed that Meghan trashed her and spread outright lies in order to talk down on their family members.

Samantha pointed out that Meghan told Oprah that she (Meghan) was an only child, whereas they both share the same father, Thomas Markle.

According to Samantha, Meghan also lied when she told Oprah that she last saw her (Samantha) “at least 18, 19 years ago and before that, 10 years before that.”

Samantha further claimed that Meghan was wrong when she told Oprah that she (Samantha) only changed her surname to Markle after Meghan started dating Harry.

Speaking to TMZ about the suit, Meghan’s attorney, Michael Kump, said, “This baseless and absurd lawsuit is just a continuation of a pattern of disturbing behaviour. We will give it the minimum attention necessary, which is all it deserves.”

This generation is too comfortable with prostitution – Finesse’s Bnxn spills