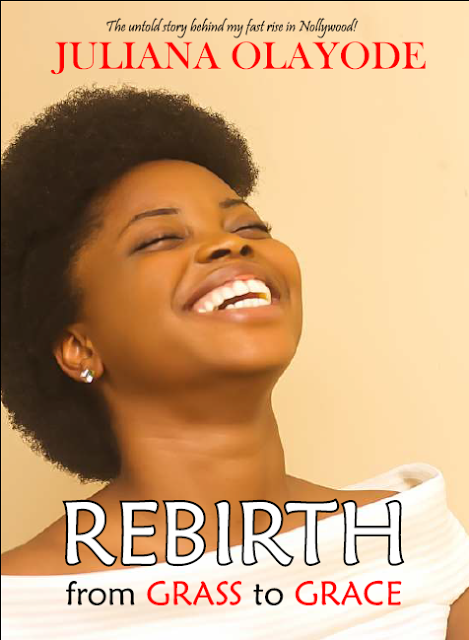 Earlier today, we brought you story of how actress Juliana Olayode, popularly known as Toyo Baby of Jenifa’s diary fame lost her virginity and other things we learnt from her REBIRTH book!

The revelation no doubt come as a shock to many of her fans who have believed all the while that their role model is a virgin, untouched, especially since she is an advocate for the no sex until marriage movement.

In addition to that, we bring you why she lied she was a virgin.

In her 150 pages book (REBIRTH), she explained how she confessed to her foster father Timi Adigun and his wife. She wrote:

There comes a time in our lives when and where we are just tired of bottling things
up. There is a time to let go or we stand a chance of exploding. Secrets make us sick.
For years, I hid my past from Dee and Maama and from my very close friends. It
could be very disheartening when people close to you think they know you and speak so
highly of you everywhere without actually knowing the true you.
I watched Dee, who is also my pastor and mentor, use me as case study several times
when preaching. He would tell the adolescents or undergraduates he was talking to that
Toyo Baby, their celebrity crush, was a virgin and keeping herself sexually pure until
marriage. Yes, I was committed to sexual purity, but I was no virgin.
He would look at me, with the pride of a dad and mentor as he mentioned my name.
The congregation he was addressing would applaud. I was miserable. I tried several times
to tell him, but I just could not. The times I attempted to, I would say, “I have something
to tell you”. When he asked what it was, I would say something else.
This was someone who God had used for me in more ways than I could ever
recount. I hated the fact that I was not totally honest with him and his family. I was scared of his reaction. Would he stop being proud of me? Would he stop me from following him for ministrations? Would he ask his children to stay away from me? Would he ask me to confess before the church? I was tormented by fear.
Many times, we are afraid to confess things to people we love, afraid to hurt them
but in actual fact, it is our withholding the truth that hurts more.
I wrote Dee a letter, confessing everything to him, but I never gave him. I ended up
tearing it. I would type long confessions on Whatsapp and end up deleting them. I would
record voice notes and delete afterwards. I even rehearsed my confession speech several
times in front of the mirror, but the moment I stepped out of my room, my courage
failed me. I had told him bits of the truth earlier about being in love with my music teacher
when I was younger but I left out the important details. I had thought before then that
the only person I owed the truth was my husband but this was different. I lost my peace. I assumed it was because he had become a father to me; a father who bragged about his
daughter but his bragging was based on falsehood. I felt like I had betrayed his trust. I
could not even imagine how Maama would feel; I decided not to think much about that.
One day, long after, when I was on a long stay with my elder sister, Adetutu, away
from my home with TiTiMi, I decided to face my fears. I could not sleep that night. I was
ready to face whatever the consequences were.
I typed a very lengthy message to Dee, explaining everything. As I typed, I wept
profusely. I concluded I had lost my relationship with him and his family. I was sure he
would never trust me again, he would never forgive me and would always take me as a liar.

She went further to write about how people assumed she was a virgin after her first Instagram post and how she had to lie about it on TV!

However, the fact that I had confessed to TiTiMi Adigun did not mean the world now knew. People had assumed I was a virgin. I had never said I was but I had never corrected their assumptions either. So, I was still in that fix.
Shortly after my confession, Ebony Life TV called me for an interview. I went and for the first time in my several interviews, I was asked point blank if I was a virgin. I tried
to evade the question, but my interviewer was not having it. She demanded for a yes or no. I did not see the question coming and I lied. I said, “Yes, I am a virgin”.
Immediately the interview was over, I hurried to the bathroom in the studio and cried. I felt terrible for lying and told God I was sorry. I called Dee on my way home and
confessed my wrong. I explained further when I got home.
The next thing he said shocked me. He said, “Call her and confess the truth. Ask for a rescheduling of the interview; do it again and undo your mistake.”
I was not going to do that. I felt it was my secret and the whole world need not know
about it. I was upset with myself, however, for answering her. I could have insisted I
could not tell. So, I proposed never to answer such again. Easier said than done, right?
Shortly after, I was on another TV interview, Crux Of The Matter, with Elsie. I was
invited to talk for sexual purity while the other guest spoke against. In the process of the
discussion, around the time when it was heated, I was asked out of the blues again if I
was a virgin. And before I knew it, I heard myself lying again. I was mad at myself.
I was on another TV interview that trended for a while. It was On The Couch, with
Lady Ariyike. I talked about sexual purity, but thankfully I was not asked if I was virgin.
After that one, I decided to stop interviews altogether. I was tired of lying or having to
dread lying if I was asked straight up.

If you haven’t gotten the book, you can get it HERE!

Nigerians blast Juliana Olayode for lying about her virginity

How Juliana Olayode lost her virginity, other things we learnt from her “REBIRTH” book