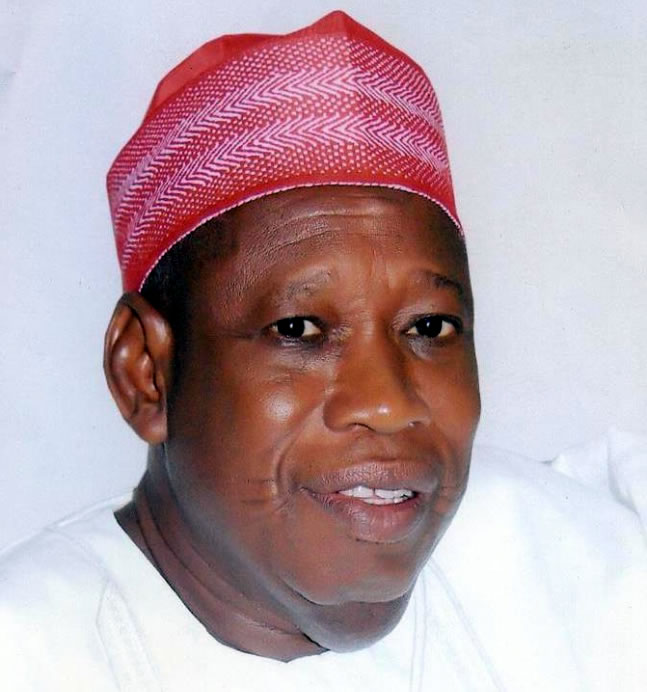 Yesterday, Gov. Abdullahi Ganduje of Kano State on says the state is ready to grant land and tax incentives to investors, to revolutionise agriculture and promote investments in various sectors.

Ganduje said this at the 2017 Annual General Conference of the Nigerian Bar Association (NBA) in Lagos with the theme “African Business: Penetrating through Institution Building’’.

The governor spoke at the Showcase Session of “Investment Opportunities in Kano State’’.

“We have decided to make land acquisition very easy and speedy. A lot of red-tapism and a lot of bureaucracies and we decided to replace that ministry with the Bureau for Land Management,’’ Ganduje said.

He said that Kano was working to boost the nation’s economy and its Gross Domestic Product (GDP).

He said that President Muhammadu Buhari was doing a lot to tackle insurgency in the North East and succeeding.

Ganduje said the state government had made huge investments in securing lives and property in the state through procurement of vehicles, communication gadgets and trackers to check insecurity.

“Kano State presently enjoys very peaceful atmosphere that would encourage any serious local and foreign investor to come to the state and derive the benefits of the efforts made so far by the government in the area of security.

“Economic and social activities are now going on in all the 44 local government areas of the state without any hindrance.

“The state is not a good place for Boko Haram, kidnappers, armed robbers, rapists, cattle rustlers and other peace disturbers.

“Peace and tranquility are some of the key words that project Kano State as excellent location for investors,’’ he said.

The governor said that the state had the largest forest reserve in the country and to prevent terrorists hijacking the space, the state government had converted the forest into a military training ground.

Ganduje explained that Micro, Small and Medium Enterprises sector was strong and diverse, with an estimated 1.6 million businesses and enterprises across all economic activities that contributed about 70 per cent output and employment.

He said some resources of the state were being worked upon to restore it to its former glory as one of the leading economies in Africa.

The resources include textiles and apparels, plastic and rubber, paper and paper products, leather, food and beverages and basic industrial products.

The governor said that the state’s huge population of about 15 million people provided market opportunities, in addition to a history of contact with strategic markets in West, Central and Northern Africa, the Arabian Peninsula, Europe and the Far East.

Ganduje said that he had strengthened the legal system to deal with issues of economic crime.

He said that the state had computerised land operations to remove bureaucracy in the process of land acquisition and processing of documents, saying that it also offered some other free incentives.

“We have recently given free land and tax/levy reliefs to some new companies; notable among them are Black Rhino/Dangote Group, which will construct 100MW Solar Plant at the cost of 150 million dollars,” he said.

Ganduje said that St Meer International Investment and Management Company, would invest 120 million dollars to finance a similar project in the state.

He explained that during the colonial era and after the nation’s independence, the state was known for the production, in large quantities, of groundnuts (groundnut pyramids), hides and skins, sesame, soybean, cotton, garlic, gum arabic and chili pepper.

The governor said that agriculture was the mainstay of the state’s economy with its farmers producing most of the grains consumed in the country and neighbouring African countries.

Ganduje said that some development experts had already invested about N65 billion on industries in the state.

“Agriculture occupies a prominent position in the state’s economy as employer of labour, provider of food and incomes for households and supplier of raw materials to industries.

“Approximately 75 per cent of the populace is directly or indirectly engaged in some form of agricultural activity- including crop, livestock and fishery production.

“Crop production with an estimated value of N721.2 billion, which constitutes more than 50 per cent of Gross State Product, is practicable in Kano State.

He said that the state had good road networks and recently signed an signed an MoU with a Chinese firm on the possibility of Kano City Light rail.

The Emir of Kano, Alhaji Sanusi Lamido Sanusi, cited examples of some Asian countries that had worse beginnings than Nigeria and now transformed into first class global economies.

Sanusi said that several countries that experienced worse challenges than Nigeria were still making economic progress, saying that Nigeria had the huge potential for speedy industrialisation through agriculture.

He urged investors not to be discouraged by the security situation in the country, adding that huge investments were still ongoing in countries like Afghanistan, Iraq and the Niger Delta area.

The emir urged investors to feel free to negotiate terms which he would facilitate with the help of the state governor.

“If you want anything come and tell us what it will take,’’ he said.

Also the Director-General, Kano State Investment and Properties Ltd., Alhaji Lawal Alhassan, while reeling out achievements of the government, said the state was seeking partnership with its Lagos counterpart.

“Investors coming to Kano would be given free land,’’ he said.

The Chief Operating Officer of Dangote, Mr Olakunle Alake, in his speech, stressed the need to educate farmers.