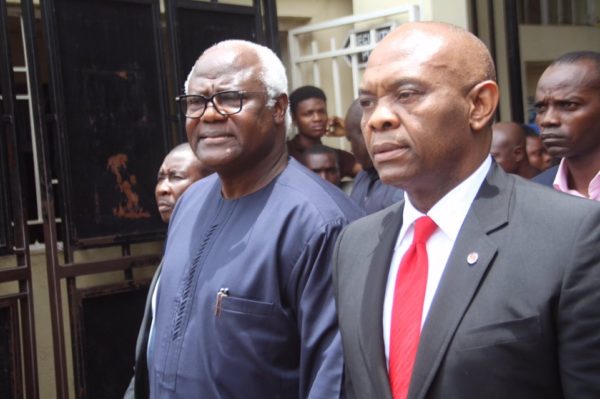 Nigerian banker and philanthropist, Tony Elumelu has donated $500,000 to Sierra Leone to help alleviate the suffering of people affected by flood and mudslide, TOPNAIJA.NG has discovered.

Elumelu made the donation to Sierra Leonean President Ernest Bai Koroma on Wednesday during a visit to the country.

“I was deeply moved by what I witnessed today and have therefore donated $500,000 towards the rehabilitation & recovery efforts,” Elumelu said via his Twitter handle.

Elumelu called on other wealthy individuals and organizations around the world to support relief efforts in Sierra Leone.

The Nigerian philanthropist also called the attention of international media to the Freetown floods and bemoaned the fact that the world’s major news organizations have not given significant media attention to the crisis.

“All lives whether on the African continent or elsewhere are the same and should attract the same media attention and human sympathy,” Elumelu said.

More than 3,000 people lost their homes in last week’s mudslide in Sierra Leone, which killed at least 499 people, with more than 600 still missing. There is still no precise figure on the total number of victims.

Three years ago, Elumelu donated about $300,000 towards Ebola containment and relief across Sierra Leone, Guinea and Liberia.

Elumelu, 54, is one of Africa’s most prominent business leaders and philanthropists. The author of Africapitalism, he is the chairman of United Bank for Africa, Transcorp Nigeria and Heirs Holdings, a proprietary investment firm.

His Tony Elumelu Foundation is an African-based, African-funded philanthropic organization that supports entrepreneurship in Africa by enhancing the competitiveness of the African private sector.