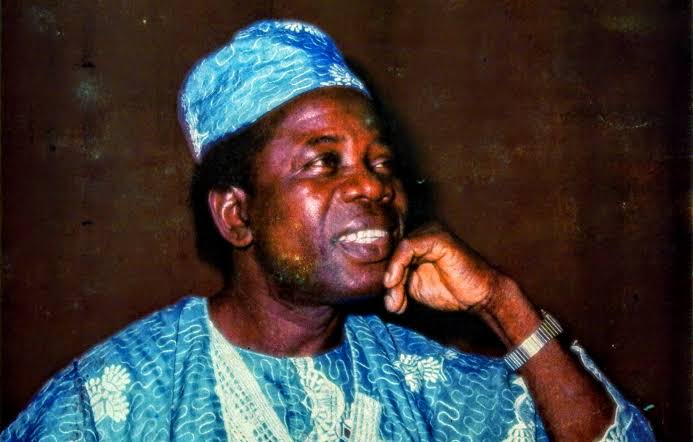 All you need to know about Isaiah Kehinde Dairo popularly known as I.K Dairo Let’s take a look at his Biography, Nationality, Career, Age, Net worth, Family.

ABOUT
Isaiah Kehinde Dairo MBE was a notable Nigerian Jùjú musician. Who was unoccupied with work, spent his time listening to the early pioneers of juju music in the area and experimented with drumming. His interest in jùjú music increased over time, and in 1942, he joined a band led by Taiwo Igese but within a few years, the band broke up.

EARLY LIFE
Isaiah Kehinde Dairo was born in the town of Offa, located in present-day Kwara State. He was born in the year 1930, his family was originally from Ijebu- jesa before migrating to Offa. He left Offa and Ijebu – Ijesa to work as a barber, a construction worker and a cloth merchant amongst other jobs in order to earn a living. On his journey, he took along with him a drum built by his father when he was seven years old. By the time he was residing in Ijebu-Jesa, he was already an avid fan of drumming.

EDUCATION
Isaiah Kehinde Dairo attended a Christian Missionary Primary School in Offa but had to quit his schooling due to his family’s finances.

CAREER
In 1948, he went to Ede, a town in present-day “Osun State” where he started work there as a pedestrian cloth trader and played music with a local group on the side. One day, while his boss was away traveling, I.K. Dairo decided to join his fellow friends to play at a local ceremony, unknowing to him, his boss was coming back that same day, the boss was furious with the act and he was relieved of his job as a result.

I.K. Dairo’s musical career entered the fast lane when he founded a ten piece band called the Morning Star Orchestra in 1957. In 1960, during the celebration of Nigeria’s independence, the band was called on to play at a party hosted by a popular Ibadan based lawyer and politician Chief D O A Oguntoye. With a lot of prominent Yoruba patrons at the venue, I.K. Dairo showcased his style of jùjú music and earned attention and admiration from other Yoruba patrons present, many of whom later invited him to gigs during cultural celebrations or just lavish parties. In the early 1960s, he changed the band’s name to Blue Spots and he also won a competition televised in Western Nigeria to showcase the various talents in jùjú music. During the period, he was able to form his own record label in collaboration with Haruna Ishola and achieved critical and popular acclaim and fame.

I.K Dairo emergence at the end of the 1950s coincided with the rising euphoria towards independence. He was seen then as a premier musician who could capture the exciting moment preceding the nation’s independence and briefly after independence. The musical taste during the period had graduated from appreciation of solemn music to much more intensified sounds. The period was also one of lavish parties with musicians as a side attraction.

I.K. Dairo musical success in the 1960s, was influenced by different factors including a resort to include traditional sounds, the political life of the 1950s, which inspired him and a focus on Rhythm, beats and tempo that reflected different ethnic sounds and in the process leading to his appeal rising beyond his primary ethnic group. His band experimented and played with musical styles originating from different Yoruba areas and also used the Edo, Urhobo, Itsekiri and Hausa language in some of their lyrics. The band’s well organized and slick arrangement, Yoruba and Latin America influenced dance rhythm and patronizing lyrics on the entrepreneur pursuits of patrons were factors that contributed in his rise to the height of the Juju and musical arena in the country. He also employed musical syncretism, mixing the Ijebu-Ijesa choral multi-part sound with melodies and text from Christian sources.

In 1962, he released the song ‘Salome’ under Decca records. The song mixed traditional elements in Yoruba culture and urban life as major themes.

The song was a major hit of his. Another song of his which was quite popular was Ka Sora (Let Us Be Careful), the song is sometimes described as predictive of the Nigerian Civil War in its warning about the pitfalls of unreasoned governance. He also released other popular hits including one about Chief Awolowo, who was incarcerated at the time the song was released.

Dairo’s stay at the top in the Nigerian music scene was short lived, by 1964, a new musician; Ebenezer Obey; was gaining ground and by the end of the 1960s, both Obey and King Sunny Adé had emerged as the popular acts of the period. However, Dairo continued with his music, touring Europe and North America in the 1970s and 1980s. He was also involved in a few interest groups dealing with the property rights of musicians. Between 1994 and 1995, he was a member of the Ethnomusicology department at the University of Washington, Seattle.

I.K. Dairo later pursued various manual tasks after his firing and was able to save enough money to move to Ibadan, where Daniel Ojoge, a pioneer Jùjú musician usually played. He got a break to join a band with Daniel Ojoge and played for a brief period of time before returning to Ijebu-Ijesa, most of the gigs he plays with Ojoge’s band were at nights.

INSTRUMENTS
The band made use of an amplified accordion, which was played by I.k., and he was the first high-profile musician to play the accordion. Other musical instruments used by the group includes, electric guitar, talking drum, double toy, akuba, ogido, clips, maracas, agogo (bell), samba (a square shaped drum).

FAMILY
Isaiah Kehinde Dairo was married to three wives and had 24 children.

PERSONAL LIFE
Some people say that his life long love for music stemmed from a drum that his father made for him when he was younger and that accompained him wherever he went. He is considered by many as the ‘Father of Juju’ and has been desribed by some as the Shakespeare of Music. He died on February 7th, in Efon-Alaiye near Akure at age 65 from Renal failure and Complications from Diabetes.

ACHIEVEMENT
He was awarded an MBE “Member of the British Empire”in the year 1963, by The Queen Elizabeth due to his cultural contributions to the Commonwealth.

NET WORTH
Isaiah Kehinde net worth is not available.