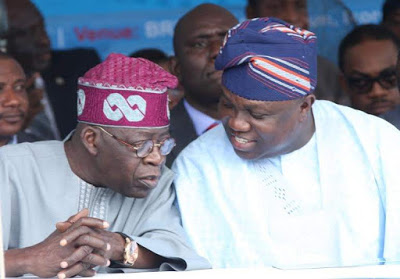 Tinubu said if not for the honesty and integrity of the elder statesman, he would not have become the governor of Lagos State in 1999.

The former Governor explained that it was Adebanjo who insisted the results of the primary election which favoured him must be upheld even when others were trying to scuttle it.

Tinubu spoke at the formal launch of an autobiography in commemoration of the 90th birthday anniversary of Adebanjo.

The programme was entitled “Telling It As It Is,” and was held in Lagos.

Tinubu said, “He (Adebanjo) insisted that every member of the AD must stand for primaries. He said the results of the free primary election must be upheld and that was in my favour.

“If he were corrupt, he would have collected bribe then as the Acting Chairman of Action for Democracy but he stood his ground and upheld the primary election, which later made me the governor of the state.

“May God bless you. I pray that you will continue in this your honesty, I respect you, and you are a mentor to me.

“Though we may disagree on some issues, he is my mentor and he taught me rebellion, that means I am not a bastard.”

Abia First Lady’s aide, one other die in convoy accident