How #EndSARS protesters were attacked in Abuja
Advertisement 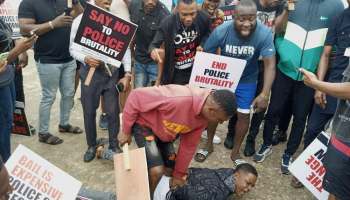 Earlier today, yet to be identified hoodlums and thugs launched yet another attack on #EndSARS protesters in the nation’s capital.

The protesters, who have been on the streets for over one week, have come under attacks from security agencies and suspected thugs.

On Saturday, they blocked major roads in the federal capital territory (FCT) and continued with the demand for an end to brutality.

But suspected hoodlums attacked the protesters at Kubuwa as many of them scurried to safety.

Before the incident, the demonstrators had marched across various parts of the nation’s capital, demanding good governance.

The Federal Capital Territory Administration (FCTA) had banned protests in the city but protesters have refused to leave the streets.

In Lagos, organisers of the protest hired private guards after suspected hoodlums attacked protesters in Ikeja.

Nigeria’s President Muhammadu Buhari has called for “patience and calm” as he announced the disbandment of Sars which as been replaced with a new division named Swat (Special Weapons and Tactics).

With protests continuing though, many protesters have rejected the new division.

‘You blocked their future, they block your roads’ – Shehu Sani mocks FG