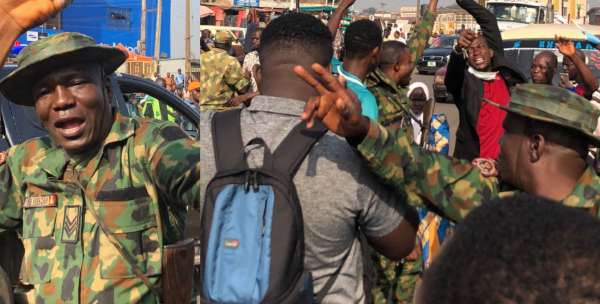 
A group of civil society organisations has described the Nigerian Army’s reaction to the #EndSARS protesters as a “dangerous violation of citizens’ right”.

In a statement on Friday, the coalition made up of 14 CSOs, said the #EndSARS protest is an affirmation of citizen’s readiness to resist bad governance.

It said the ongoing protest to end police brutality is legitimate and must be protected.

The coalition condemned the “thinly veiled threat” issued by the army, saying it is “ill-conceived in the face of legitimate citizens’ protest and a threat to constitutionally guaranteed rights”.

“While #EndSARS is focused on the immediate concern of a brutish policing system, the protesters are also inherently voicing their anger against a governance system, which has failed to reckon with them,” the statement read.

“The accumulated anger of citizens over decades of failure in the delivery of basic social services, endemic corruption, and impunity of political office holders has precipitated distrust of, and lack of confidence in the state and its institutions.

“In this respect, we strongly condemn the thinly veiled threat issued by the Military High Command, wherein the unacceptable move is being made to crush the peaceful protests.

“We call on the military to immediately withdraw its ill-advised attempt to undermine the constitutional freedom of citizens to voice their displeasure about the state of the country.

“The Military should remain in their barracks and at their duty posts, defending the territorial integrity of the country, and not deployed in a dangerous anti-people and anti-democratic operation to crush a people who are exercising their right to freedom of association, freedom of expression, and freedom of assembly.”

Reminding the Nigerian authorities that the entire world is watching its response to the demands of the youth, it said the “illegal bans” on protests “constitute an ominous prelude to what we suspect would be a harsh clampdown on citizens”.

“We must reiterate here that the practice of dehumanizing citizens and stripping them of their dignity, which has become ingrained in the security and defence sectors, is a manifestation of the institutional decay and systemic crisis of governance, and is a measure of the failure of political leadership by Nigeria’s ruling class,” the statement read.

“This is why what is expected of any responsible government, political leadership, and ruling class, is to step back and reflect and to undertake a radical overhaul and comprehensive, root and branch reform, of the police and policing, of the security and law enforcement agencies, as well as of the armed forces.

‘You blocked their future, they block your roads’ – Shehu Sani mocks FG