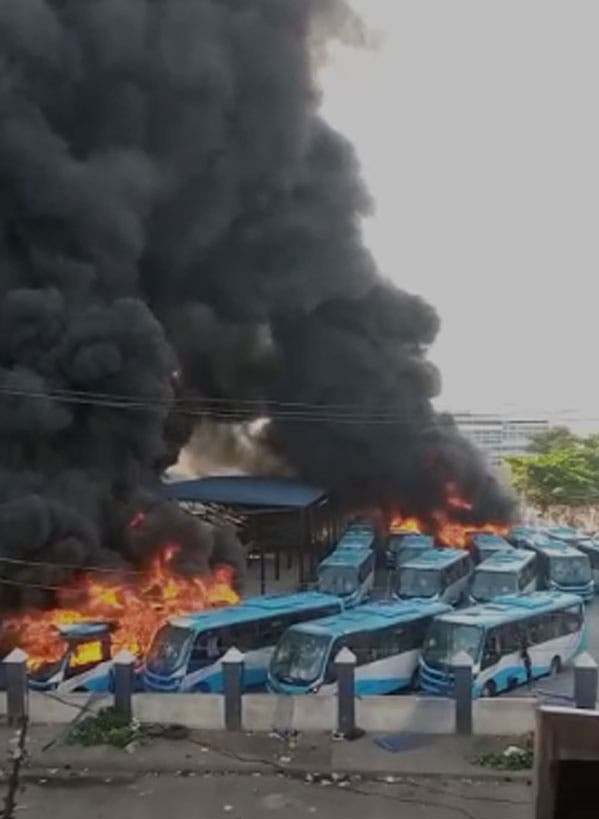 Hoodlums camouflaging as #ENDSARS protesters have descended on the Lagos state government-owned Oyinbgo Bus Terminus and set it ablaze, along with the buses parked there.

Several properties in Lekki are also reportedly under arson attack, after the Lekki-Ikoyi Link Bridge toll gate was burnt. The TVC station, owned by the APC leader, Bola Ahmed Tinubu, has been set ablaze and the station is off-air.

A senior staff told TopNaija that the station was attacked today. The police reinforcement called in on Tuesday, could not stop the attack.

It was resisted by the combined forces of the Nigerian Police and members of the Odua Peoples Congress OPC.

There was shooting throughout the night, and hundreds of hoodlums were determined to burn down the station, after two stations within the area ILASA and CELE were torched.

No fewer than eight people were gunned down, according multiple social media reports.

This incensed others and led to the burning of the modern bus station, along with the buses. Bola Tinubu, national leader of the All Progressives Congress (APC), is believed to be the main target of the attacks.

#EndSARS protester, Oke has been shot dead in Lagos