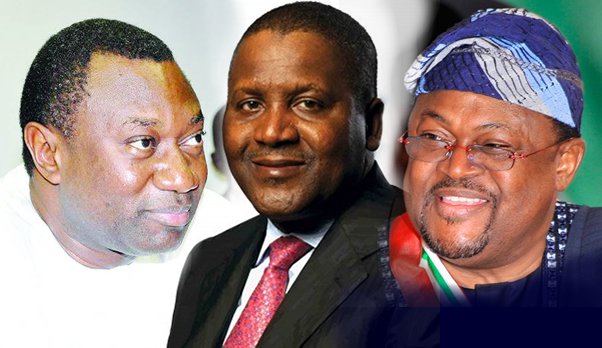 The world renowned organisation for ranking of rich individuals, Forbes, has unveiled the list of richest people in Nigeria for 2017.

The ranking issued today shows Aliko Dangote retaining his spot as number one.

2. Mike Adenuga: Mike Adenuga is the second richest man in Nigeria with interest in Oil and Gas and telecoms. He is the owner of Globacom, Nigeria’s second biggest telecom operators and the chairman of Conoil.

3. Femi Otedola: He is the CEO of Zenon Oil and Gas and Forte Oil Plc. He has interest in real estates amongst other sectors.

4. Folorunsho Alakija: Folorunsho is a business tycoon who has interest in fashion,oil and printing industries. She is the richest Woman in Nigeria and the richest woman of the African descent in the world.

5. Theophilus Danjuma: Former Nigerian Chief of Army staff between 1975 to 1979. He is the current chairman of Athlantic Petroleum.

7. Tony Elumelu: A philanthropist and founder of the Transcorp and Heirs Holdings. He was the chairman of United Bank for Africa.

8. Orji Uzor Kalu: The former governor of Abia State. He is the founder and chairman of Slok Holding. A conglomerate with interest in shipping, banking, oil, trading, manufacturing and the media. He became a real business man at the age of 19 after being expelled from a Nigerian University for allegedly spearheading a series of student riots.

9. Jim Ovia: Jim Oviah is the founder of Zenith Bank. He is the chairman and the largest shareholder with a stake of almost 10%. He also manages a mobile telecom Visafone which has over 3 million subscribers.

10. Oba Otudeko: Oba Otudeko is the Chairman and founder of the honey well group. He is also the chairman of FBN Holdings Plc. His operations spread across oil and gas, flour minning, real estate, and marine transportation.

“I couldn’t help falling for him,” British woman blushes as she weds 45 years younger Nigerian