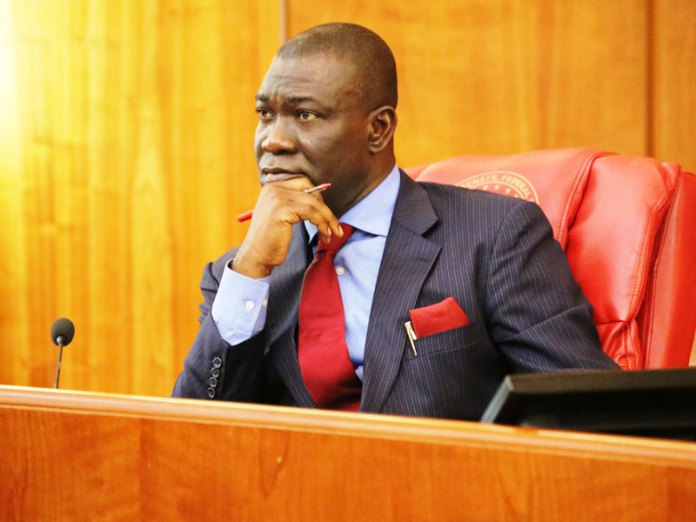 Following the controversy generated by the arrest of the Chairman of the Innoson Group, Mr. Innocent Chukwuma, by the Economic and Financial Crimes Commission (EFCC), the Deputy President of the Senate, Senator Ike Ekweremadu, has waded into the dispute between the businessman and Guaranty Trust Bank Plc (GTBank).

Chukwuma was arrested on Tuesday by operatives of the EFCC and the police at his residence in Enugu and flown to Lagos the next day over what was deemed a commercial dispute between his automobile manufacturing company and GTBank.

However, his arrest triggered an outcry and condemnation by the Senate and several groups in the South-east who wondered why the EFCC was getting involved in a dispute between a customer and his bank, and one which was already being adjudicated at the Supreme Court.

Twenty-four hours after Chukwuma’s arrest, however, the EFCC released him on bail but also gave an account into the circumstances leading to his apprehension.

It maintained that he was arrested because he had refused to honour its invitations in the past to respond to questions bordering on allegations of a N1.478 billion fraud and forgery charge.
The EFCC also accused the industrialist of among other infractions, allegedly using forged documents to secure tax waivers.

But after initially stating that he would not accept his release on bail until a reason had been given by the EFCC for his arrest, Chukuma arrived the Kanu Ibiam International Airport in Enugu Thursday to a heroic welcome.
Irrespective of his release, Ekweremadu, THISDAY learnt, has reached out to the parties in the commercial dispute to sheathe their swords so that an amicable resolution could be reached.

More importantly, the Deputy Senate President is concerned that what under normal circumstance is a commercial transaction, has assumed an ethno-political dimension which must be nipped in the bud, said a source close to Ekweremadu.

Ekweremadu, on Wednesday in the Senate, had questioned the rational for Chukwuma’s arrest by the EFCC over a commercial dispute that was already in court.

He argued that the anti-graft agency had over-reached itself and had no business stepping into a civil matter between a bank and its customer.

His position and that of other senators, who supported his motion, resulted in the Senate condemning the arrest of Chukwuma and the institution of a probe into the matter.

“The DSP (Deputy Senate President) has reached out to both sides to sheathe their sides, so that a resolution can be reached once and for all on this matter.

“It is important for him that the reputational damage to both sides be limited, so he is intervening in the matter.
“As you know, this dispute is protracted and is now assuming an ethnic dimension which should not be the case, as it is a commercial transaction.

“So, the DSP will try his best to bring both parties to the table to settle the dispute in a manner that is agreeable to all.

“It was for this reason he argued forcefully for Chief Chukwuma’s release on the floor of the Senate on Wednesday, because he knew that his arrest by the EFCC would cause more harm than good,” said the source.

But even as the source opened up on the intervention by Ekweremadu, Chukwuma after initially rejecting his release by the EFCC, returned to Enugu Thursday to a heroic welcome.

Chukwuma, who arrived the Enugu airport at 1.20 p.m. could not leave the airport immediately, as he was sandwiched by a crowd of supporters.

Hundreds of aged men and women, including youths with placards most of which berated the EFCC, had stormed the airport as early as 8 a.m. to welcome the automobile manufacturer.

His return affected business activities within the airport’s vicinity as the crowd accompanied by traditional masquerades danced and celebrated Chukwuma’s release.

Addressing reporters, Chukwuma expressed dismay that the EFCC officials were yet to tell him the reason for his arrest.

“I thank everybody who fought for me on this matter because I was surprised that early on Tuesday morning they jumped into my house. I thought they were kidnappers or armed robbers but finally, I noticed it was the EFCC.
“Around 7.30 in the morning, they said they wanted to arrest me and I went with them to their office, but up till now, they have not told me my offence.

“When I got there, they said I should go but they did not tell me what I had done. They arrested me like a criminal took me to their office (in Enugu) and after that to the airport in my shorts and singlet to Lagos,” he said.
While describing his ordeal as an “illegal arrest”, Chukwuma dismissed the claim by the anti-graft agency that he refused to honour its invitation as totally false and shocking to him.

“EFCC under Ibrahim Magu has never invited me, nobody invited me, they just jumped into my house. If they invited me I would have gone to answer them because I am a genuine businessman. I am an industrialist; I don’t have anything in my cupboard.

He, however, refused to state whether or not he will drag the commission to court for the violation of his fundamental human rights.
“I don’t know for now if I will go to court against this unlawful arrest but what I know is that they have not told me up till now what warranted it.

“I have never forged a tax wavier document in my life, never in my life! I pay all my taxes, I pay my duties, I am a genuine businessman. I am an industrialist,” he said.
While expressing appreciation to President Muhammadu Buhari for his belief in the rule of law, Chukwuma also thanked various governors who condemned his arrest and fought for his release.

“I also thank members of the National Assembly for their support in voicing out my illegal arrest; the traditional rulers across the divide from the North to the South. To all media organisations, various human rights groups, the youths, the ‘Free Innoson’ social media crusaders, and everybody who gave a voice to condemning my illegal arrest, thank you all,” he said.

Despite the rejoicing in Enugu over Chukwuma’s release, the leading Igbo socio-cultural organisation, Ohanaeze Ndigbo, declined to comment on the arrest and subsequent release of the Innoson boss.
When THISDAY contacted the President-General of the organisation, Chief John Nwodo, on the phone, he refused to speak on the issue.

Meanwhile, the President of the Senate, Dr. Bukola Saraki, has said there was a need to draw a clear line outlining the roles of the Nigeria Police and the EFCC, especially where it concerns matters of the state.

He said this Thursday during his remarks on the Senate’s investigation into the arrest of Chukwuma by the EFCC.
Reacting to Chukwuma’s arrest, the Senate had on Wednesday mandated its Committee on Anti-corruption and Financial Crimes to investigate the incident and examine the role of the EFCC.
It asked the committee to submit its report in 24 hours.

The committee was however unable to submit a full report at plenary Thursday.
The committee chairman, Senator Chukwuka Utazi, said his committee met with the acting chairman of the EFCC Ibrahim Magu on Wednesday.

“We have not finished, but we confronted him with the resolutions of the Senate yesterday (Wednesday).
“He has to supply us with more information. We also told him that Mr. Chukwuma should be released to return to his home,” he said.
Utazi added that Chukwuma, who has since been released by the EFCC on bail, had called to express his appreciation to the Senate for its intervention.

Having listened to Senator Utazi, Saraki directed the committee to also focus on the need to outline the role of the anti-graft agency and that of the police where state matters are concerned, as their roles seem to be overlapping.

“What is really important is the need to examine where a matter becomes a case for the state. Is it that the police no longer have a role?

“We should look at their responsibilities because there seems to be an overlap in their duties,” Saraki said.

But even as the Senate was yet to conclude its probe into Chukwuma’s arrest, the Attorney-General of the Federation (AGF) and Minister of Justice, Mr. Abubakar Malami Thursday in Abuja denied knowledge of any criminal case involving the Innoson boss.

Confronted by State House correspondents on the justification for Chukwuma’s arrest, Malami, who spoke after the conclusion of the two-day meeting of the Federal Executive Council (FEC), said he was not privy to any information leading to his arrest.

He said he was only aware of the case between Chukwuma and GTBank, which he added was being prosecuted by a law court.
Malami said that until he is properly briefed by the affected agency, he will not be able to make further submissions on the arrest.

“In all sincerity, I am not privy to facts that led to the stated arrest. I haven’t been briefed by the relevant agencies, but one thing I know is that there has been a case between him and GTBank that is pending before a court and it is being prosecuted.

“Apart from that, I am not privy to the facts and circumstances that led to his arrest. So, until I’m briefed by the relevant arrest agencies, I’m not in a clear position to make any disclosure about the arrest,” Malami said.
Malami also said FEC approved two memoranda that he presented to it on two bills meant to protect creative works and on the suppression of piracy in the maritime industry.

“It is a bill that relates to the creative industry. It is meant to ensure the protection of creative works against piracy and protection of intellectual property rights.

“The bill was approved by the council and I have been accordingly instructed to send the bill to the National Assembly for passage into law and eventual assent by the president if passed.

“The second memo that was presented from the Federal Ministry of Justice was a memo relating to the suppression of piracy and maritime offences.

“The intention is to accord protection to the maritime industry against piracy and indeed come up with a comprehensive policy position that will be incorporated into the bill which is intended to ensure that at the end of the day, the international convention that has been ratified by Nigeria over time in relation to the maritime industry is incorporated into the bill with a view to bringing it in line with international best practices and ensuring the protection of maritime boundaries.

Related Topics:EkweremaduGTBInnoson Dispute
Up Next