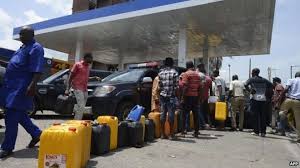 Mr Bassey Nkanga, DPR Operations Controller in charge of Cross River, who led his team on an intensified surveillance on fuel stations across the state, said that the stations were shut down for violating government directives.

Bassey said that the intensified surveillance exercise was carried out to ensure that the product released from the depot was sold to the public at the government approved price of N145 per litre.

According to him, long queues in most fuel stations across the state had reduced due to the increased flow of product supply in the state.

“If the supply is consistent within the next few days, there will be no queues again. We are intensifying efforts to ensure that the product is available for all at the stipulated price.

“We have sealed three fuel stations for un-accounted three trucks of fuel; two were sealed in northern Cross River and one inside Calabar. Since these fuel stations lifted the product from the depot yesterday, some of them are claiming that the truck broke down on the way.

“We have given them 24 hours to report back to us, and if they fail to do so, we will conclusively deduce that they have diverted the product and we will apply all the sanctions accordingly.

“If any marketer is caught diverting the product, he or she will pay N200 on each litre diverted, if it is a whole truck, the marketer will pay like N6million and if you are caught selling above government price, you will pay N100,000 as fine respectively’’, he said.

The DPR Controller urged motorists and other users of the product not to panic-buy and store in their houses for safety purpose, adding that the government was doing everything possible to bring back normalcy in petroleum product supply.

“I wish to appeal to the general public to have faith in government because all efforts are on ground to ensure availability of the product in the country’’, he said.