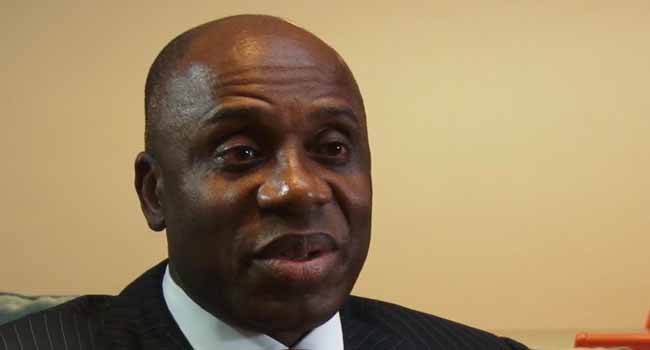 The Minister for Transportation, Mr Chibuike Amaechi, has denied any rift between him and Rivers State Governor Nyesom Wike, describing the governor as one of his ‘sons’.

Amaechi, who was also governor of Rivers State from 2007 to 2015, said this during his appearance on Channels Television’s Question Time.

“He (Wike) was my staff; he is like one of my sons,” Amaechi said during the programme which aired on Thursday. “Why should I engage him? He was local government chairman when I was the Speaker (of the State House of Assembly),” he said.

The minister, however, accused the governor of failing to sustain the efforts he had made in developing Rivers State.

He also alleged that Wike was trying to tamper with the love the people of the state have for him.

“When I was governor, I used Rivers State’s money on projects in the state. If you visit the state, you will see the primary schools that we built. No matter what the governor does, the projects are there.

“I hired 13,200 teachers who are alive, I established primary schools, the primary schools are there. They are no longer maintained. When I was there, I appointed a contractor whose responsibility was to come to school like the children.”

Both men have been involved in what many believed to be a ‘lingering quarrel’, even in the face of the clash between the security details attached to both men when their convoys came head to head in November.

On November 11, the security operatives attached to Amaechi made up of men of the Special Anti-Robbery Squad (SARS) had reportedly knocked down Wike’s Escort Rider apparently in a way to make way for the former governor.

The incident, which occurred at Nwanja junction in Trans Amadi area in Port Harcourt, was later brought to a halt after the chief security detail to Governor Wike physically chased the SARS operatives away.

SPECIAL REPORT: November of Deaths: Over 200 killed in attacks across Northern Nigeria