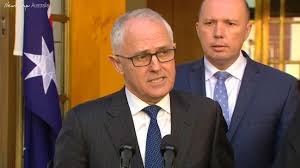 Australia’s National Security Agencies will be concentrated under a powerful new Home Affairs ministry in a cabinet reshuffle announced by Prime Minister Malcolm Turnbull on Tuesday.

It is the first time the Australian Security Intelligence Organisation, the domestic spy agency and the federal police have not been under the control of the Attorney General.

Dutton, a former Queensland police officer, has caused international controversy with his hardline posture against asylum seekers who try to reach Australia by boat, and his administration of the refugee detention centres on Nauru and Manus Island.

The creation of a U.S.-style homeland security portfolio was foreshadowed by Turnbull in July, but it has taken time to work out the ministerial amalgamation of the national security and intelligence agencies.

Brandis is replaced by Christian Porter, a former state attorney general in Western Australia, who is seen as a rising figure in the ruling Liberal Party.

Turnbull announced a string of other promotions and ministerial shifts to set his government up ahead of the next election due in late 2019.

Related Topics:AustraliaCabinet Reshuffle
Up Next