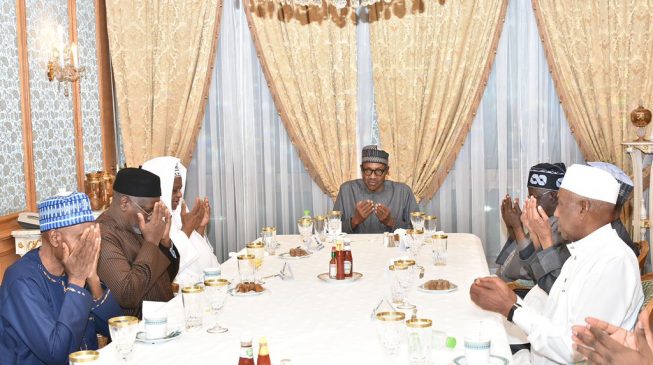 A day after hosting Abdulaziz Yari, governor of Zamfara state, President Muhammadu Buhari held a meeting with Mamman Daura, his cousin, and Bola Tinubu, a national leader of the All Progressives Congress (APC), in Saudi Arabia, where he is performing lesser hajj.

According to Garba Shehu, presidential spokesman, Abubakar led prayers for Buhari’s second term in office, and for the nation to overcome current challenges.

The monarch was said to have pledged support for Buhari’s administration.

Speaking after the meeting, Tinubu called on Nigerians to support the president in ensuring peace and stability in Nigeria.

Buhari, his wife and Tinubu

He said Buhari has worked hard and will continue to do so.

“The President worked hard and will continue to do so to ensure peace and stability in the country, which are important for the economy to make progress. These are the key pegs of his agenda. Let us all come together to support him,” Tinubu was quoted to have said.

He also took a swipe at the Peoples Democratic Party (PDP) which accused the president and the APC of using Facebook as a platform to weaken the growth of Nigeria.

Tinubu said the PDP is reputed for “saucy statements’’, urging Nigerians not to be angry with the opposition party, but assist them to overcome their “colossal defeat” in the 2019 elections.

“Don’t blame them. They are handicapped by the traumatic feelings of the colossal loss of the election. You should help them to manage the trauma,” he said.

Buhari, who left the country on Thursday to perform umrah (lesser hajj) in Saudi, is expected back in Nigeria on Tuesday.

How I once attempted suicide – Betty Irabor