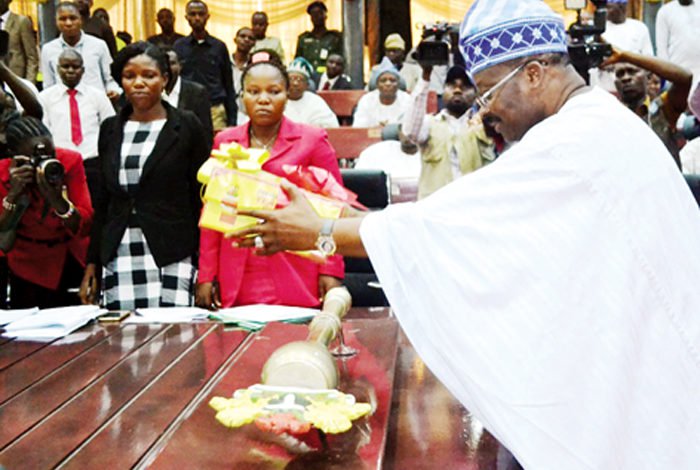 The presentation, christened: Budget of Stabilisation, was well attended by royal fathers, including the Alaafin of Oyo, Oba Lamidi Adeyemi; the Aseyin of Iseyin, Oba Salaudeen Adekunle as well as monarchs, like Oba Owolabi Olakuleyin, Oba Eddy Oyewole and Oba Lateef Adebimpe.

There were also party chieftains, captains of industry, members of the State Executive Council (Exco) and the public.

The proposal shows that revenue is projected at N93.68 billion from the Federation Account, N7.53 billion from transfers (LG, JAAC for LGSPD and LGSC), and N112.10 billion from Internally Generated Revenue (IGR) and an increase of four per cent over the 2017 budget.

The recurrent revenue stands at N213.3 billion and the capital receipt is N43.72 billion.

The proposed budget shows that N39.84 billion will be spent on personnel cost, N25.24 billion on overhead and N53.28 billion on consolidated revenue. While the recurrent expenditure stands at N118.37 billion, capital expenditure is N149.1 billion.

He said: “The aggregate percentage of 93.71 per cent of the capital expenditure allocated to the economic and social sub-sectors underscores the state government’s determination to continue to pursue a people-centred, empowerment-focused agenda. We consider this as the best antidote to the problem of poverty amongst our people.

“In line with Fiscal Sustainability principle, personnel expenditure has been rationalised to be 15 per cent of the total budgeted expenditure.”

On his administration’s efforts in the last six years, Ajimobi said the security and peace the state is enjoying would be taken to a higher level.

According to him, closed-circuit television (CCTV) cameras will be mounted in crisis-prone areas to improve security surveillance and management.

Accepting the document, , Speaker Michael Adeyemo assured the governor of speedy passage of the budget.

He said the Assembly would continue to support and work with the Executive.

The Speaker also said the Assembly would step up its oversight function to complement efforts of the governor to make Oyo a “transformed and well positioned” state.