Why no one’ll be sworn-in in Bayelsa – Oshiomhole
Advertisement 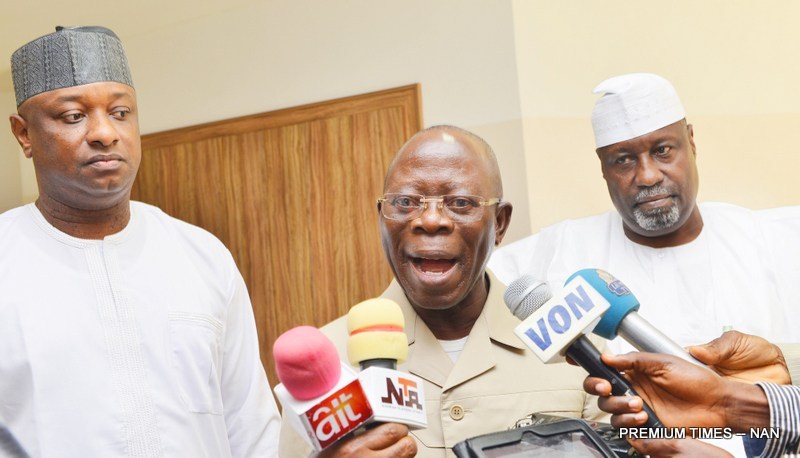 The national chairman of the All Progressives Congress (APC), Adams Oshiomhole has said Duoye Diri, candidate of the Peoples Democratic Party (PDP) in the November governorship election in Bayelsa, will not be sworn in on Friday.

Reacting to the sack of David Lyon, his party’s candidate who was declared winner of the election but sacked by the supreme court, Oshiomhole said the PDP candidate did not meet the requirement for swearing in.

At a press conference in Abuja, Oshiomhole said the supreme court directed the Independent National Electoral Commission (INEC) to withdraw the certificate of return issued to Lyon and present another to the candidate, who has the required spread in the election.

He said there was no candidate in the election that met the requirement apart from Lyon, adding that the implication is that from Friday Bayelsa will be without a governor.

“Nobody has raised issues about whether or not David Lyon and his running mate won overwhelming majority in the said election. Issues of whether a chieftaincy title is part of a name or is not a name,” he said.

“In our view couldn’t be a reason to dismissed the wishes of the great people of Bayelsa state who repose absolute confidence in the way in which they elected David Lyon and his running mate during the last governorship election.

“Let me also say that it is not a state secret, if as the supreme court has ruled, David Lyon cannot now be sworn in as the person who has the highest number of votes and the spread to be sworn in, it simply means from tomorrow there will be no governor in Bayelsa state.

“But, as far as we know the next candidate, as the facts are before court, who happens to be a PDP candidate does not have one quarter of the total lawful vote cast in that election in 2/3 of the local government councils in Bayelsa state.

“And, therefore from the fact available to us, in consultation with our lawyers, it is clear that there is no candidate that meet the requirements of the supreme court, which means no one can be sworn in legally tomorrow unless there is a delibrate abuse of the legal process.”

Oshiomhole said Lyon won convincingly, saying a candidate who lost the election could not be imposed on the people of Bayelsa.

In a manner which seemed as if he was blaming the supreme court, Oshiomhole said when a similar case was brought before the apex court in 1999, INEC was ordered to conduct a fresh election.

“In 1999, there was a similar case in Bauchi involving Gov Adamu Muazu. The court found out that the running mate was not qualified for whatever reason to contest that election and accordingly the supreme court nullified the election of Gov Adamu Muazu. And, the court as a consequence directed INEC to conduct a fresh election,” he said.

“I believe it is still the same supreme court and therefore we have asked our lawyers to exploit all legal windows to ensure that Bayelsa people have a governor of their choice.

“I have chosen to respond to this judgement so that we do not live the great people of Bayelsa in doubt as to where we stand. We stand by them. I also want the Nigeria public to know the position of the APC.

“Let me say that as bad as the case of Zamfara was, where after we have won the governorship election, senatorial, house of reps and assembly elections, the court held that APC didn’t conduct primary in the state. And, therefore didn’t participate in the election. This one is totally different.”