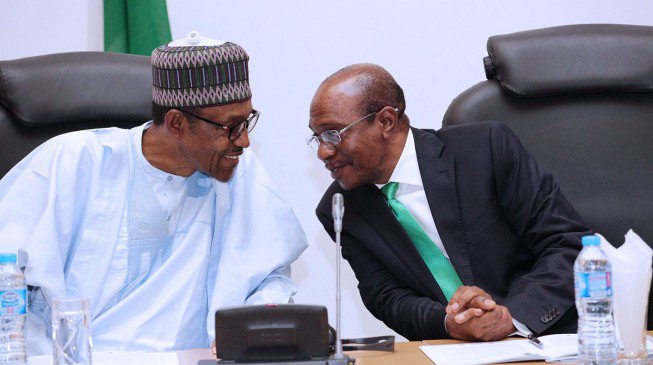 
Governor of the Central Bank of Nigeria (CBN), Godwin Emefiele has said he is optimistic that President Muhammadu Buhari will appoint new ministers in good time to help monetary policies thrive.

At the monetary policy committee press briefing on Tuesday, Emefiele was asked if he could advice President Buhari to reconstitute his cabinet on time to ensure that fiscal policies aid monetary policy for Nigeria’s development.

Responding to this, Emefiele said appointing ministers is a difficult task, but he is optimistic that the president would do what Nigerians have asked for.

“It is important for me to say that the decision to reconstitute or appoint ministers, I must confess I don’t have all the details,” Emefiele said.

“But I do know it is not an easy one given the fact that the president must go through finding suitable and hardworking people that can work for the country from at least the 36 states of the country.

“It is not an easy task but I am optimistic that since you have called for it, you will get what you want.”

In 2015, President Buhari did not appoint his ministers until October — six months after he was declared the winner of the presidential poll.

TOPNAIJA.NG recieved an exclusive list of the first 21 ministers appointed by Buhari on the last day of September 2015.

The list was transmitted to the senate on September 30, 2015, but was not presented to the general assembly of the senators until October 6, 2015.

Supporters of the president, including Tunde Bakare, the serving overseer of Latter Rain Assembly, said the president did not appoint ministers on time because there was no money to pay them.

The president on Wednesday has asked the current ministers to keep working until May 28, 2019.

Police arrest 5 soldiers, 83 others over armed robbery in Borno