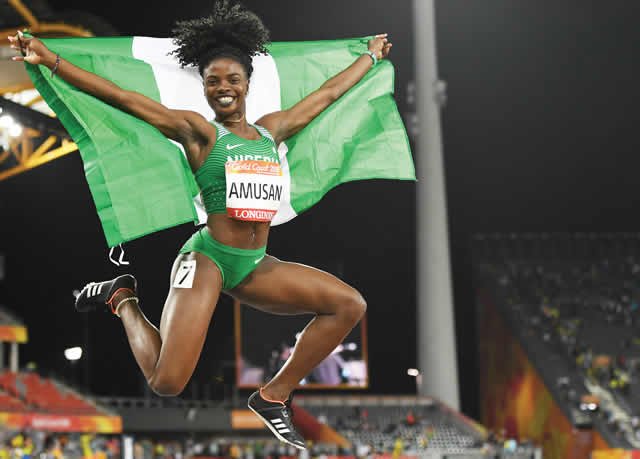 In light of Tobi Amusan emerging as world champion in the 2022 World Athletic competition in Oregon, U. S. A, APC presidential candidate, Bola Tinubu via his social media handle penned a congratulatory message to the Nigerian athlete.

The 2023 general elections is as close as you can think of, and politicians vying for the Presidency are doing all they can to show their presidential qualities.

And for the All Progressives Congress flag-bearer, he is no different as his campaign team ensures he is one of the first Nigerians to congratulate the Nigerian ambassador on his social media handle.

Call it whatever you will, but the politician’s media team are doing all they can to put their client to the fore front of Nigerians and on media headlines.

The former Lagos State governor is joined by other Nigerian celebrities to pen down congratulatory messages in reaction to the world champion’s victory in the competition.

Tobi Amusan, despite the many negative reports on the country, has emerged as one of the positives Nigeria can pride on.

Along with Mr. Macaroni, Tinubu joins a host of other Nigerians to celebrate Tobi Amusan victory in the 100m Women Hurdles race in America.

The athlete broke a world record in the 100 meters women hurdles after finishing at 12.06 seconds in the final breaking her own record in the semi final of 12.12 seconds.

Mr. Macaroni along with a U. K based Nigerian doctor, Dipo Awojide sent congratulatory messages to the athlete for her victory and emerging as world champion.

At a time when the former Lagos State governor faces a host of criticisms over his candidacy for the Presidential seat and the Muslim-Muslim ticket, Tinubu’s campaign and social media team are doing all they can to divert attention and create a better PR image for the presidential aspirant.