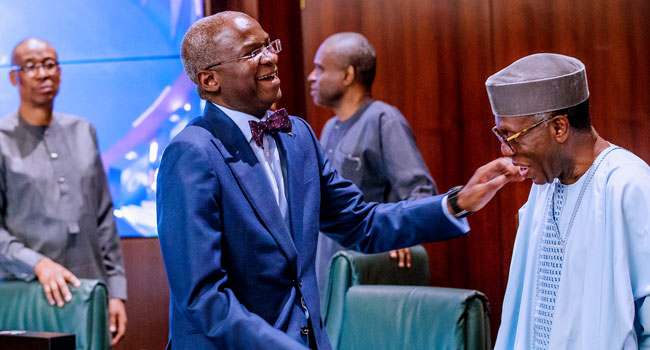 Is Nigeria broke? Came the question which to former Lagos State governor, Babatunde Fashola was far too straight forward to require a direct response.

Trust a Nigerian politician not to give you the obvious answer and more the politically correct response, especially when such would lead to further questions that may ultimately end up becoming PR nightmare.

The current Minister of works and housing recently sat with Seun Okinbaloye on Channels television to address infrastructural achievements under the current administration within the last 7 years of hanging on to power.

Other matters such as the country’s financial situation arose to which the interviewer came up strong with the question.

The former Lagos State governor responded by lessening the intensity of the question and diverting its response to a different angle.

“I don’t manage the finances of the country,” he answered.

“I know that there are financial headwings globally and all the nations or almost all of them are facing one economic challenge or the other, access to funding is becoming challenging and there are so many reasons for that, there was a global lockdown that happened during Covid so economic activities slowed down.” Babatunde Fashola added.

Speaking further, the Politician went on to deny the question, revealing Nigeria is not broke.

“To the best of my knowledge Nigeria is not broke, being indebted and being able to service your debt in conventional finance is not being broke.

“I think you must understand that the business of lending itself is a profitable business so if nobody contracted debt where will all the banks and financial institutions be? Where will they throw all the people they employ?

“The mentality that we can’t take debt must leave our table, all the big nations we want to compete with are contracting debt to build their infrastructure and out perform competition and as long as you can service your debt you are good”

Of course, in a political climate like Nigeria’s, it’s quite difficult expecting a politician who is part of the current administration and is looking to be a part of the next, to admit the country is in a very bad shape.

And it is even quite difficult knowing he could be quoted and used by the opposition as a campaign vocal point. But the obvious question to which Fashola avoids, remains, is Nigeria broke?