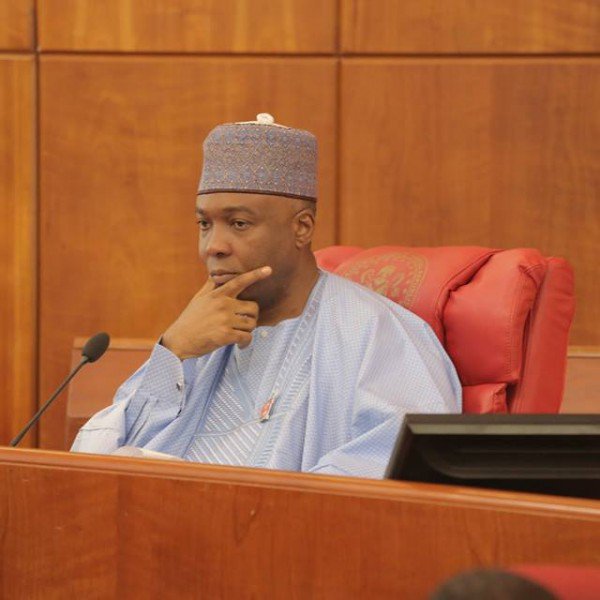 The President of the Senate, Dr Bukola Saraki, said he had stopped collecting pension in Kwara state, where he was the governor between 2003 and 2011.

He said, on the News Agency of Nigeria (NAN) Forum in Abuja, that he wrote a letter to the state government to stop the payment of the pension.

According to Saraki, the move was sequel to complaints from some quarters that former governors who are currently senators or ministers were receiving pension and salary in their new jobs, all from the government.

A civil society organisation, Socio-Economic Rights and Accountability Project (SERAP), had accused the former governors of receiving double pay from government, and said it was illegal.

“No, I’m not collecting pension; the moment I saw that allegation, I wrote to my state to stop my pension.

“So, I speak for myself on that part; I’m not doing that, I am not receiving pension from my state,’’ he said.

On other senators involved on the issue, Saraki said “I think I will leave everybody to their individual decision.

“Morally, if you have got another job, you should give it up until when you are truly a pensioner.

“Some of these oversights are not addressing the issues. What the states should do is to go and amend their laws to say that if you have another appointment then you are not entitled to that benefit.

“With this, we will just simplify the matter.”

On the role of Bank of Infrastructure in the country, Saraki said that the Senate had not had any serious interface with the bank, but that it was involved in some projects.

“We are not engaging with them particularly. I think that they were part of those involved in the Lagos-Ibadan road. But, I don’t think government should really put funds into that.

“I have this strong view and I feel very strongly about it, that nowhere in the world has government funded infrastructure.

He said there were a lot of complaints that budgetary allocation to health and education was too low, attributing it to the fact that much money was being invested in infrastructure development.

Saraki explained that due to the challenges, the National Assembly had passed Bills that would encourage private sector participation in infrastructure development.

“What should happen is that we should try and get private sector to take over some of these infrastructure so that the money can go into education and health.

“By doing that, banks like Bank of infrastructure will come in.

“We are really pushing the idea of, particularly, the Lagos-Ibadan road, that appropriating that project from the budget does not show seriousness.

“This is a road that is very viable; that is centre of the commercial activity and we should see how private sector can participate.

“For example, even if you go by the budgetary allocation on that road, last year was N30 billion, this year, after back and forth, we took it back to N20 billion.

“This was done so that if they don’t find private funding, we will take it up,’’ he said.

According to him, even if the N30 billion was provided, it will not be enough because that road needs about N100 billion to be completed.

“So, the point I’m making which I want to emphasise is that it is the kind of laws and policies that we pass that will encourage private sector that will make the infrastructure deficit to reduce.

He confirmed that the senators had fulfilled their October, 2016 pledge to contribute N300, 000 each to support Internally Displaced Persons (IDPs) in the North-East.

He said that the senate would continue to tackle humanitarian crisis in the North-East through budgetary appropriations.

“I think that to the best of my knowledge, that is happening but it goes beyond just that. I think that we have shown that we will continue to support in form of appropriation of adequate money.

“As you saw just last week, we also approved some foreign loan that will go toward supporting activities in the North-East as palliative means to fight humanitarian crisis.

“We are close to about 800 million dollars we approved for the executive from that point of view.

“We are always ready to support our men and women in uniform to ensure that whatever they required was provided,” Saraki said.

He added that the lawmakers had been meeting with a lot of Non-Governmental Organisations (NGOs) to provide support to the North-East.

“We are looking at the possibility of what we can do to create more incentives for Nigerians.

“We are approaching individuals and companies to make more donations and see what kind of concessions they can get for the kind of donations they are making in the North-East,” he said.