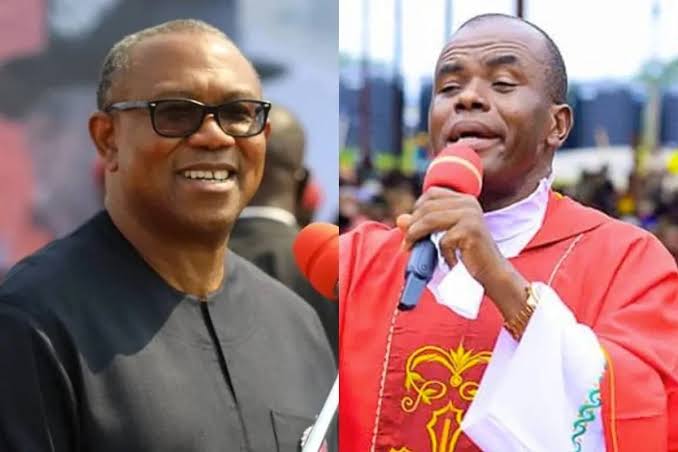 Topnaija.NG has reported that Peter Obi, presidential candidate of the Labour Party (LP), during an interview on Sunday, said that the Spiritual Director of Adoration Ministry, Enugu, Father Ejike Mbaka, remains his father in faith.

Recall that while speaking during one of his religious programmes last Wednesday, the preacher said that the former Anambra State governor cannot win next year’s general election because he is “stingy”.

Mbaka came under heavy criticism for his comments on Obi, which led to a ban on his ministry from the Enugu Catholic Diocese.

But speaking on the radio station, Obi said: “For me, Father Mbaka is an ordained priest of God and as a priest, he remains my priest. I will always respect and show my allegiance to the church.

“Whatever he says, I will take it because he’s my father in faith. I respect him and he’s my brother.”

Mbaka had gone under heavy criticism from the comment, which led to a ban on his ministry from the Enugu Catholic Diocese.

Reacting to the comment, Bianca Ojukwu, widow of the Biafran warlord, Chukwuemeka Odumegwu-Ojukwu, spoke on Obi’s ‘stinginess’ and how families benefited from it.

Senator Ogba bursts, says he is the most authentic governorship candidate