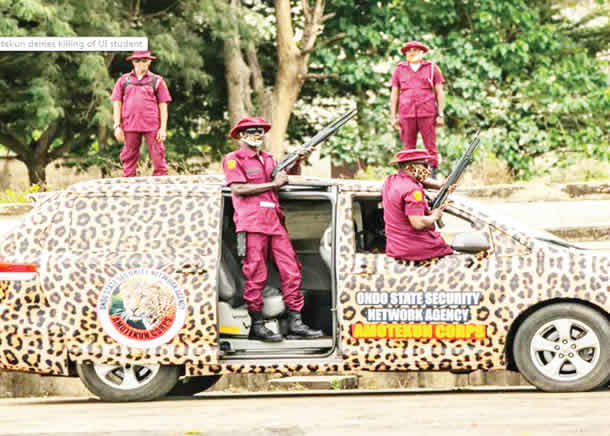 On Sunday, South-West states including Ekiti, Ondo and Osun announced that they had deployed Western Nigeria Security Network, Amotekun corps, in their forests and boundaries to check killer herdsmen.

But all the states said they had deployed Amotekun corps to their forests and boundaries with other state to check infiltration of killer herdsmen.

Although Miyetti Allah Cattle Breeders’ Association of Nigeria, initially opposed the order, at a meeting its leaders had with Nigeria Governors’ Forum and Akeredolu, the cattle breeders accepted the Ondo State Government’s directive.

Besides the order that the herdsmen should vacate forest reserves, Akeredolu also banned movement of cattle along the highways and within the cities, night grazing and underage grazing .

On Sunday, the Special adviser to Ekiti State Governor on Security Matters, Brigadier General Ebenezar Ogundana (retd.), said that killer herdsmen were not in Ekiti forests.

Ogundana said, “We don’t have them in our forests for now. We are going round all our forests and what we hear is that ‘they are coming’. Anybody that knows where they are in the forests should alert us. We have not got any call from anywhere.”

He said that the issue of killers in the forests had been checked, saying, “Operatives of Amotekun and other security agencies are watching the boundaries with neighbouring states. We have our own contingency plan. We have additional outfit, Operation Flush, which sees to what is happening in the forests and the highways.”

Also, the Commander, Ekiti Amotekun Corps, Brigadier General Joe Komolafe (retd.), said operatives of the agency were working to ensure the forests and indeed the state were consistently free of killers.

Komolafe said, “We are monitoring all the forests. We are carrying out patrols and monitoring of events. We liaise with the Amotekun Corps in Ondo and Osun states to tell us movements so that we can have early movements.”

The corps commander said the agency was also collaborating with traditional rulers across the state, “so that if they see any strange face or movement in the bush, they should tell us.

“There are security agencies everywhere in all the local governments. Men of the DSS (Department of State Services), police, civil defence and vigilante, we liaise with all of them,” Komolafe said.

Adewinbi, however, did not reveal the specific strategies the corps would employ in the task of keeping the reserves safe. He also dismissed insinuations that some herdsmen, who were driven out of Ondo forests, had found their way to Osun.

“I am not aware that herdsmen driven from Ondo have relocated to Osun. I am not aware. However, we have our plans to ensure that our forests are not occupied by criminals,” Adewinbi said.

Meanwhile, the Ondo State Government said the efforts to flush out the herdsmen from the forest reserves in the state were still ongoing.

The Special Adviser to Governor Rotimi Akeredolu, on Security Matters, Alhaji Jimoh Dojumo, said there was no going back on the order of the state governor asking the herdsmen to vacate the forest reserves .

He said, “We have set up a task force that is going into the forests to flush them out and they are making progress. We are still awaiting their reports to know what step to take next, but they are leaving.”