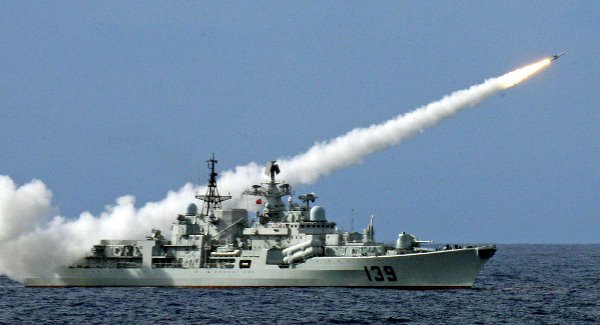 The possible war focused at North Korea by the U.S has forced China to begin a war simulation exercise in the Yellow Sea, showcasing its naval capability.

Report says that the exercise was coming also in the wake of the announcement of a $1 billion sanctions programme targeting North Korea’s coal, lead and iron exports.

Therefore, Beijing is staging almost a dozen military exercises in the Yellow Sea.

The navy drills will send a signal that the Chinese “will be effective in any conflict if war is to break out,” Malcolm Davis of the Australian Strategic Policy Institute, said.

However the message isn’t intended for Pyongyang alone, Collin Koh of Singapore’s Nanyang Technological University says. “States do this because they want to send a signal … it’s not just targeted at North Korea,” Koh said.
Sputnik reports that China’s naval strength is increasing significantly.

“Last week, the Chinese added yet another monster ship to their fleet, which the Royal United Service Institute’s Peter Roberts has described as growing at a pace that seems to be unequalled “in any navy across history.”

The drills will include live-fire testing, offensive and defensive mobilization rehearsals, and the integration of efforts by surface vessels, submarines and aircraft.

“Dozens of types of missiles” will also be launched during more than 10 tests, SCMP noted.

27 sentenced to death over mass killing of soldiers