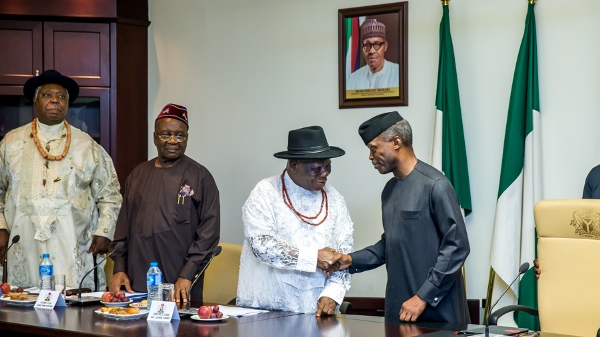 The Federal Government and Pan Niger Delta Elders Forum (PANDEF) met for several hours at the Presidential Villa on Thursday and agreed to partner to actualise government’s new vision for Niger Delta.

The meeting, presided over by Acting President Yemi Osinbajo, was attended by the Ministers of Environment, Niger Delta Development Affairs, State for Petroleum, and the Chairman of NDDC, Sen. Ndoma Egba.

Elder statesman and leader of PANDEF, Clark, who addressed state House Correspondents at the end of the meeting described it as very fruitful and called on the people of the region to maintain peace and await the implementation of the vision.

““The message is that everyone should maintain peace,’’ Clarke said adding that the group had seen the commitment of the federal government to pursue its development agenda in the region.

““The meeting was excellent. We met with Mr Acting President and he was very honest, truthful, forth-right and we were very satisfied.”

Clark denied an ultimatum was issued to the federal government on the vision’s implementation but added that the parties agreed on many things with PANDEF and the ministers presenting their separate addresses and Osinbajo rounding off.

““We saw his genuineness, truthfulness, forthrightness; he is a gentleman and we support him and we are satisfied,” he said.

The PANDEF leader stated that the region would withdraw from its former position and embrace the path laid by the federal government for the development of the region.

According to him, the region and FG have agreed to work together noting that the issue of dialogue will also take place.

He assured the Niger Delta people that the 16-point agenda they presented to the FG was fully discussed as well as the government’s 20-point agenda.

On why the Niger Delta leaders were not speaking with one voice, the elder statesman said there were no other leaders in the region with dissenting voices.

He said that MEND was represented at the meeting noting that the group’s acclaimed spokesman did not exist.

“Jomo Gbomo does not exist as a human being. That is a ghost name and a fake name. MEND was here, all other organizations were here.

”I am the leader of the Niger Delta and every leader you can think of from Cross River to Edo state was here,’’ he stated.

Buttressing the points, he minister of State for Petroleum, Dr Ibe Kachikwu, acknowledged that there was no ultimatum from any part of the region to the federal government.

He said that the meeting was to find solutions to the Niger Delta issues adding that it was basically to explore how government had gone ahead with the fulfilment of the parties’ undertakings on the 16-point agenda raised during the tour of the region.

He said several issues including the University at Okerenkoko, issues related to the development of the Niger Delta generally, amnesty programme and how well it was working, and NDDC operations were discussed.

”Today was an environment of calm, peace and friendliness and mutual dialogue of the issues for them to understand where we are coming from and understand the most pressing problems that we have,’’ he said.

He acknowledged that PANDEF pledged commitment to work with the federal government to find solutions to the problems confronting the region.

He said that the alarm that was generated was that government should hurry up with the projects as the people were getting worried and tired and wanted to see positive actions on all the items.

He said that PANDEF was convinced with the explanations of the Acting President and had realized that the government was not playing about the vision to correct the wrongs in the region for over 30 years.