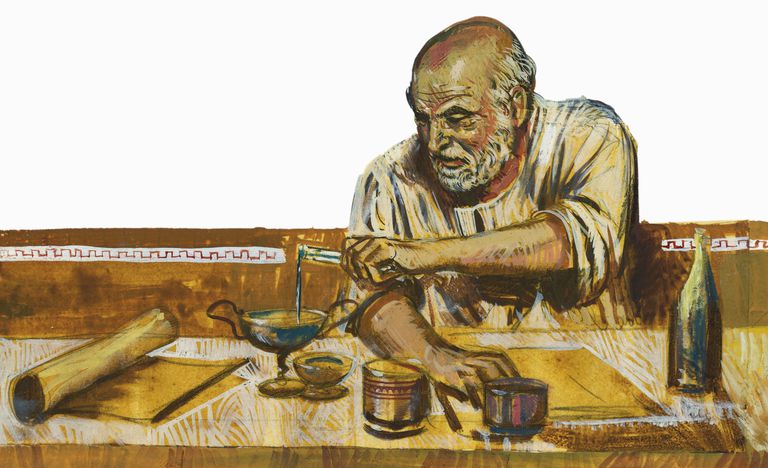 Archimedes needed to determine if a goldsmith had embezzled gold during the manufacture of the royal crown for King Hiero I of Syracuse. How would you find out if a crown was made of gold or a cheaper alloy? How would you know if the crown was a base metal with a golden exterior? Gold is a very heavy metal (even heavier than lead, though lead has a higher atomic weight), so one way to test the crown would be to determine its density (mass per unit volume).

Archimedes could use scales to find the mass of the crown, but how would he find the volume? Melting the crown down to cast it into a cube or sphere would make for an easy calculation and an angry king. After pondering the problem, it occurred to Archimedes that he could calculate volume based on how much water the crown displaced. Technically, he didn’t even need to weigh the crown, if he had access to the royal treasury, since he could just compare the displacement of water by the crown with displacement of water by an equal volume of the gold the smith was given to use. According to the story, once Archimedes hit upon the solution to his problem, he burst outside, naked, and ran through the streets yelling, “Eureka! Eureka!”

I don’t know if the part about Archimedes running naked through town is true, nor do I know how things turned out regarding the crown and the goldsmith. What I do know is you can use Archimedes’ idea to calculate the volume of an object, and its density, if you know the object’s weight.

For a small object, in the lab, the easiest way to do this is to partly fill a graduated cylinder large enough to contain the object with water (or some liquid in which the object won’t dissolve). Record the volume of water. Add the object, being careful to eliminate air bubbles. Record the new volume.

The volume of the object is the initial volume in the cylinder subtracted from the final volume. If you have the object’s mass, its density is the mass divided by its volume.

Related Topics:Educationmathematicsphysicsvolume and density
Up Next

How to Calculate Density of a Gas