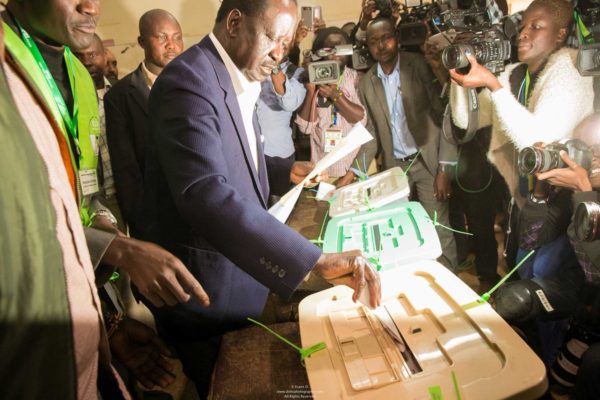 Kenya’s National Super Alliance, NASA and its presidential candidate, Raila Odinga have rejected and slammed the results being declared by the country’s electoral commission as illegal and fraudulent.

They made their positions known in separate reactions today.

The coalition, which boasts a 15 million membership strength said the results being streamed on the website of IEBC are not supported by any evidence of the tally of votes.

Presidential candidate Raila Odinga also Wednesday termed the outcome that saw him trail Uhuru Kenyatta by more than one million votes as “sham, fictitious and fake”.

Mr Odinga said the results were the “work of a computer” and did not reflect the will of voters, a claim denied by the Independent Electoral and Boundaries Commission.

He asked IEBC to provide forms 34A and 34B to help verify the outcome.

He spoke moments after his chief agent Musalia Mudavadi and Nasa lawyer James Orengo made similar claims at Bomas of Kenya.

Mr Orengo said forms 34A and 34B should be the basis of the results but the commission was just keying in results without scanning the forms as required.

“It beats common sense for those results to be admitted. The results announced at the polling station are final,” he said.

Mr Orengo said the commission had assured them that the forms would be available in their mails, if they needed them.

“We were given that guarantee more than an hour ago, that we will get the transmitted forms.

“But as we speak now, those forms have not been availed to us. If one wants to know what a fraud is; this is one,” he said.

They insisted on the forms signed by agents at the constituency level.

Mr Orengo said what the IEBC was doing is a replica of 2007 and 2013, where the electoral body transmitted results without a basis for verification.

He said IEBC can wait for forms from the polling stations, if the scanned ones are not available.

“It is disturbing that after a long process, the commission will commit such a fraud. Kenyans should ignore those results.

“According to us, the results are null and void because they are not backed by any evidence. We will not keep quiet but reject them,” he said.

With 85 per cent of ballots counted in the presidential election held Tuesday, incumbent Uhuru Kenyatta has widened his lead over his main challenger,Raila Odinga.

Since the commission began publishing the results, Kenyatta has maintained the 10 percentage lead, contrary to pre-poll predictions that the two candidates were heading for a photo-finish.